Chimpanzees draw close together to unite against an enemy • Earth.com 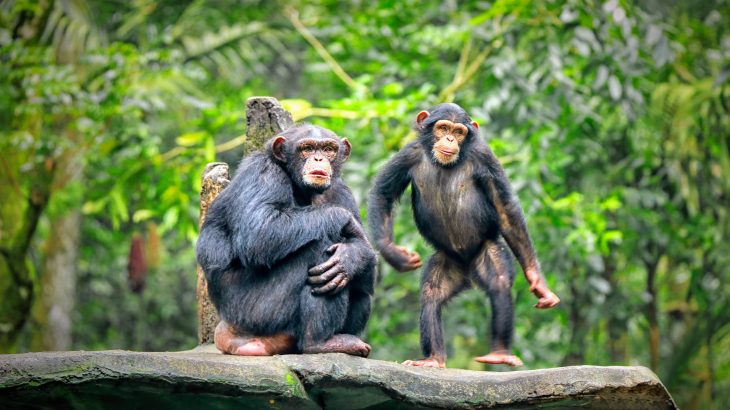 In a new study from Kyoto University, experts report that chimpanzees unite when faced with threats from other groups. This strategy is commonly observed in humans, who become more cohesive when they team up against a common enemy.

The study is the first of its kind to experimentally demonstrate this type of cooperative behavior among chimpanzees.

“Despite the importance of understanding how humans can be cooperative with their in-group and still carry out acts of extreme out-group aggression, there has so far been little study on whether the association between these behaviors holds in non-human primates,” said study first author James Brooks.

Previous field research has suggested that chimpanzees are more cohesive in days and months when they have out-group encounters. Based on this observation, the team set out to analyze the direct relationship between out-group threat and in-group cohesion.

The experts designed an experiment to observe the subjects’ behavior in response to a simulated out-group encounter. Five groups of chimpanzees listened to vocalizations of unfamiliar individuals, along with a control of crow vocalizations.

The study revealed that chimpanzees who heard the out-groups became more vigilant and stressed. Instead of translating this into in-group tension, the chimpanzees drew closer to one another, engaged in more affiliative behaviors, and were less aggressive.

Compared to the control group, the stressed out chimps were also more cooperative when they were given limited food to share.

The findings indicate that among chimpanzees, as well as humans, competition between groups fosters cohesion. The results also suggest that intergroup competition in human evolution may have led to our ability to maintain cooperation and tolerant relations in large groups in the presence of a common enemy.

“This is the first experimental evidence that humans share this propensity with chimpanzees, but it remains to be tested whether this is due to both species’ strong evolutionary history of intergroup competition or a more common trait shared with other great apes,” explained study co-author Shinya Yamamoto.

The team is currently studying whether bonobos, who are known for abstaining from lethal out-group aggression, may also engage in cohesive and cooperative behavior when faced with external threats.