Chimpanzees who lose their mothers as children suffer for life • Earth.com 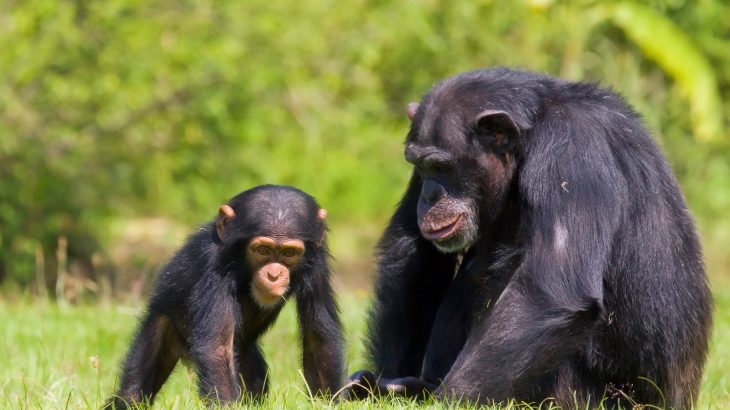 A new study from the Max Planck Institute for Evolutionary Anthropology reports that some chimpanzees suffer the rest of their lives if they lose their mother before adulthood. The researchers found that male chimpanzees who are orphaned early in life are less competitive and less reproductively successful.

The study was focused on three chimpanzee communities in Tai National Park in West Africa. The experts kept full demographic records and collected fecal samples to conduct paternity tests on all new community members for up to 30 years.

“When we study our closest living relatives, like chimpanzees, we can learn about the ancient environmental factors that made us human,” said lead author Catherine Crockford. “Our study shows that a mother’s presence and support throughout the prolonged childhood years was also likely a trait in the last common ancestor that humans shared with chimpanzees six to eight million years ago. This trait is likely to have been fundamental in shaping both chimpanzee and human evolution.”

Many experts in human evolution believe that our species managed to grow such large brains because parents continue to provide food to children until they are grown. Ongoing parental care throughout long childhoods allows time for children to learn the skills they need to survive in adulthood. Long childhoods are rare in the animal kingdom, and ours are matched only by other great apes like chimpanzees.

Despite their long childhoods, however, chimpanzees rarely provide their children with food after they are weaned at age four or five. At this point, mothers mostly let the young chimpanzees forage for themselves. This means that it is something else that mothers are providing to their children that deeply affects orphaned sons, and scientists are trying to understand what that may be.

“One idea is that mothers know where to find the best food and how to use tools to extract hidden and very nutritious foods, like insects, honey and nuts,” said Crockford.

“Offspring gradually learn these skills through their infant and juvenile years. We can speculate that one reason offspring continue to travel and feed close to their mothers every day until they are teenagers, is that watching their mothers helps them to learn.”

Great apes may be able to afford much bigger brains relative to their body size compared to other primates because they acquire the skills they need to eat more nutritious foods.

“Another idea is that mothers pass on social skills,” said study co-author Roman Wittig. “Again a bit like humans, chimpanzees live in a complex social world of alliances and competition. It might be that they learn through watching their mothers when to build alliances and when to fight.”