Hives have collective immunity thanks to older bees • Earth.com 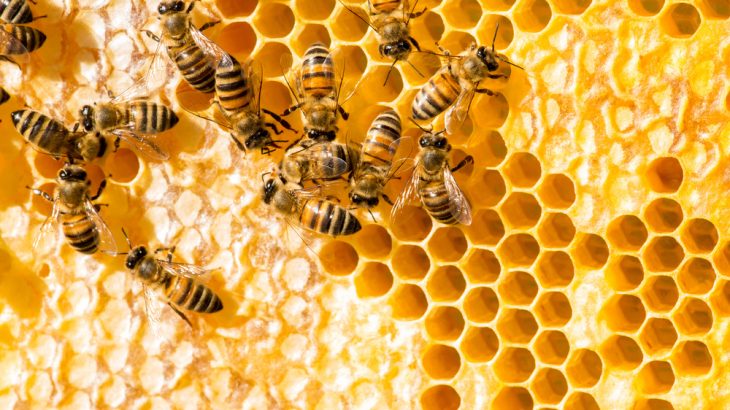 Hives have collective immunity thanks to older bees

Bees that have built up resistance to some diseases can share that immune system boost through the jelly that the hive feeds on.

A team of researchers based in the United Kingdom and Israel found that adult bees secreted double-stranded RNA into the jelly eaten by young worker bees and the royal jelly fed to the queen larva. When studying the jellies, they found RNA that corresponded to 10 different threats.

“Jelly RNAs corresponded to honey bee protein-coding genes, transposable elements, and non-coding RNA, as well as bacteria, fungi, and viruses,” the team wrote in their study, published in the journal Cell Reports.

The discovery suggests that adult bees can create a collective immunity to some diseases, fungi and other threats for the whole hive.

The team made their discovery while testing a new technique for treating illness among bees. They created their own dsRNA solution to protect against certain illnesses and fed it to adult bees, to see whether this would be an effective way of medicating a hive.

They found that it worked – too well. The hives seemed resistant to the diseases in question for months after the treated bees died. Somehow, the older bees were passing down the dsRNA to younger bees.

They soon found that the jellies fed to larva were the keys to the hives’ collective immunity.

“Consumed but pre-digested dsRNA may thus be distributed directly among adult bees. However, nurse honey bees nourish the young larvae with a processed diet secreted from the mandibular and hypopharyngeal food glands, the worker and royal jellies,” the researchers wrote.

The study adds to the possibilities for apiaries battling colony collapse disorder. It could also mean that potential solutions – such as a vaccine against bacterial infection developed by Finnish scientists – could be even more effective that predicted.