Corals put up a colorful shield after bleaching • Earth.com 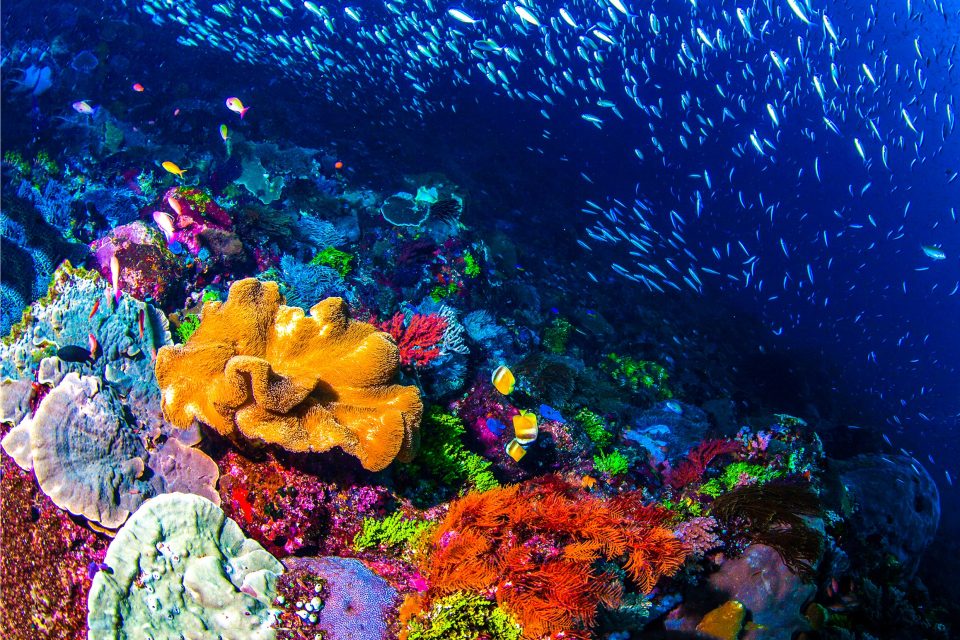 Corals put up a colorful shield after bleaching

Corals do not always turn white after bleaching, but often produce bright neon colors. In a new study from the University of Southampton, scientists have determined that this mysterious transformation is a sign that the corals are fighting to survive.

As a result of accumulated heat stress, coral animals expel the algae that live in their tissues. The corals have a symbiotic relationship with these algae, or zooxanthellae, and need them to survive.

Once the algae are lost, the coral skeleton shines through its once colorful tissues in a process known as coral bleaching. The corals typically turn solid white in this process, but some have been found to emit glowing colors.

To investigate, researchers conducted a series of experiments at the University of Southampton’s Coral Reef Laboratory.

The experts discovered that during “colorful bleaching” events, corals produce a type of sunscreen that appears as a colorful display. Beyond protection from the sun, the bright colors may encourage the coral symbionts to return.

Professor Jörg Wiedenmann is the head of the Coral Reef Laboratory.

“In healthy corals, much of the sunlight is taken up by the photosynthetic pigments of the algal symbionts. When corals lose their symbionts, the excess light travels back and forth inside the animal tissue -reflected by the white coral skeleton.”

“This increased internal light level is very stressful for the symbionts and may delay or even prevent their return after conditions return to normal.”

“However, if the coral cells can still carry out at least some of their normal functions, despite the environmental stress that caused bleaching, the increased internal light levels will boost the production of colorful, photoprotective pigments.”

“The resulting sunscreen layer will subsequently promote the return of the symbionts. As the recovering algal population starts taking up the light for their photosynthesis again, the light levels inside the coral will drop and the coral cells will lower the production of the colorful pigments to their normal level.”

The researchers believe that corals which undergo colorful bleaching likely experienced mild or brief episodes of heat stress rather than extreme events.

“Bleaching is not always a death sentence for corals, the coral animal can still be alive. If the stress event is mild enough, corals can re-establish the symbiosis with their algal partner,” explained Dr. Cecilia D’Angelo.