The moves of a dancing cockatoo are coordinated and not random • Earth.com 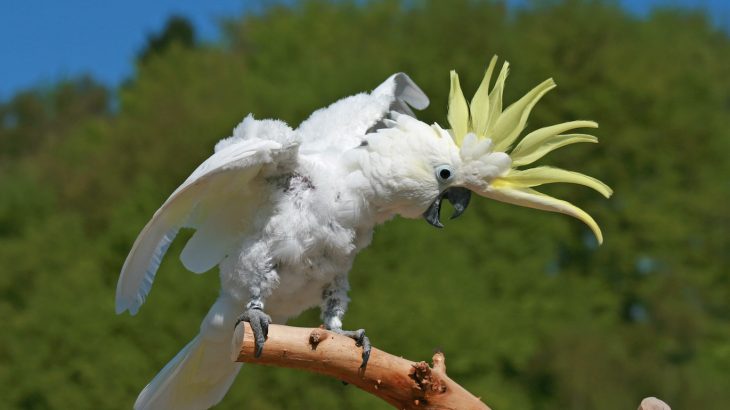 The moves of a dancing cockatoo are coordinated and not random

A new analysis of the dancing cockatoo named Snowball has revealed that the bird responds to music with diverse and coordinated movements. The research suggests that this is not a random response to music, but one that emerges from certain cognitive and neural capacities in the animal brain.

Study senior author Aniruddh Patel is a psychologist at Tufts University and Harvard University. “What’s most interesting to us is the sheer diversity of his movements to music,” said Patel, noting that Snowball developed the moves without any training.

A previous study by Patel confirmed that Snowball could move to the beat, an ability that comes naturally to humans but not to other primates. Irena Schulz, Snowball’s owner and an author on the new paper, soon noticed that Snowball was making movements to music that had not been seen before.

This prompted researchers to explore a similarity between Snowball’s dancing and human dancing found in the diversity of his movements and the body parts he uses in response to music.

Patel’s team filmed Snowball as he danced to two classic hits of the eighties: “Another One Bites the Dust” and “Girls Just Want to Have Fun.” The songs were each played for Snowball three times.

Study first author R. Joanne Jao Keehn used frame-by-frame analysis with the audio muted to focus on each dance movement or sequence of repeated movements. In the 23-minute video, Snowball completed a total of 14 dance movements and two composite movements, which included bobbing and swinging his head around in several different ways. These head motions were often coordinated with foot lifts or other moves.

Snowball tended to dance in segments of about three or four seconds, moving a little differently each time he heard a particular tune. According to the researchers, this is a sign of flexibility and perhaps even creativity.

The experts propose that the reason humans and parrots share a natural ability to dance may arise from the convergence of five traits: vocal learning, the capacity for nonverbal movement imitation, a tendency to form long-term social bonds, the ability to learn complex sequences of actions, and attentiveness to communicative movements.