Denisovans may have been drawing symbolic imagery 115,000 years ago • Earth.com 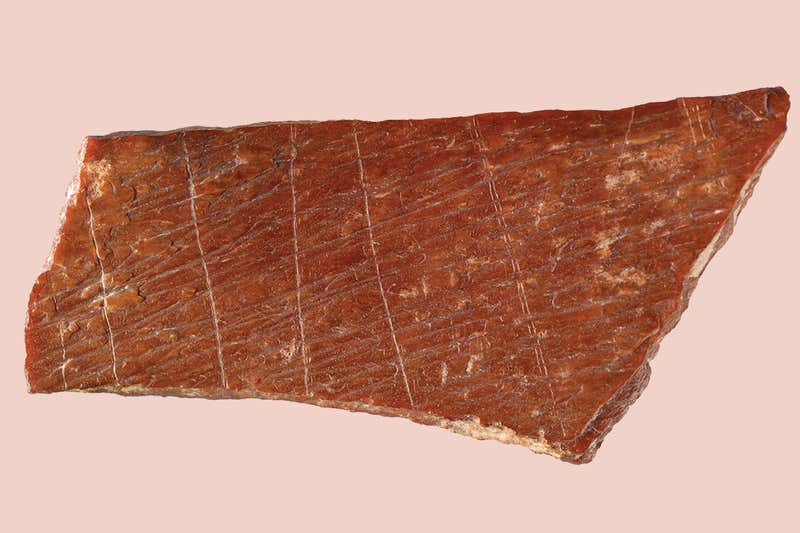 Denisovans may have been drawing symbolic imagery 115,000 years ago

Two human rib bone fragments uncovered at the Lingjing site in China are providing evidence that the Denisovans were artists 115,000 years ago. An international research team has analyzed engravings found on the bones, which may represent the first known example of symbolically mediated behavior in Eastern Asia.

“The lines on one of the bones were produced by an extremely sharp point, and the prehistoric individual was particularly careful when engraving the first five lines,” wrote the researchers. “To increase the visibility of the subsequent lines, the engraver marked them using multiple strokes.”

“Combined, this evidence does not support an interpretation of the lines as evidence of butchery activity, but rather, deliberate engraving of the bone.”

Red residue that was used to reinforce some of the markings turned out to be a naturally occurring iron oxide pigment called ochre. Study co-author Francesco d’Errico is a palaeoanthropologist at the University of Bordeaux in France.

“We need to explain why equidistant lines were deliberately engraved on a semi-fossil bone and covered with red ochre to highlight them,” d’Errico told New Scientist. “The explanation that would be given by archaeologists if this behavior was observed at a more recent site would be that this is a sign to which some sort of meaning was attributed.”

Even though modern humans reached China between 80,000 and 120,000 years ago, the skull of an archaic hominin was discovered in the same stratigraphic layer where the engraved bones were found.

“A growing body of evidence from Europe and Southeast Asia supports the hypothesis that the cultural adaptations of archaic hominins involved symbolically mediated behavior, thereby challenging the notion that modern cognitive abilities are restricted to Homo sapiens,” wrote the study authors.

“While many scholars now agree on this hypothesis with regard to Neanderthals, we offer the first evidence to suggest that the same may also apply to Denisovans – the probable creators of the Lingjing engravings.”

Genevieve von Petzinger is an expert on geometric symbols in cave art at the University of Victoria. She told New Scientist that even if they seem simple, the concept behind the marks is ridiculously cognitively complex.

“They are an artificial memory system – a way to retain information over time and space. This doesn’t happen when you communicate with others by talking. You have to use graphic marks to do it. To see closely related human species making these graphic marks is absolutely fascinating,” said von Petzinger.

The study is published in the journal Antiquity