Diseases carried by dogs may have been killing rare lions • Earth.com 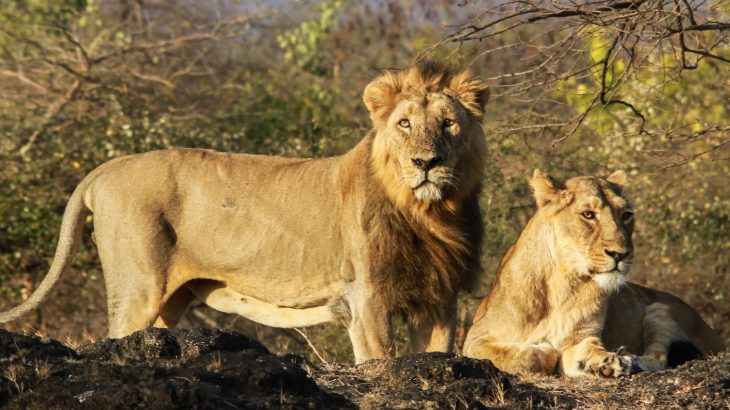 Diseases carried by dogs may have been killing rare lions

In India’s westernmost state of Gujarat, lions are dying at a shocking rate, and there is concern that diseases carried by domestic dogs, canine distemper virus (CDV) and tick-borne babesiosis, may be to blame. At least 23 Asiatic lions have died in just three weeks.

Asiatic lions are already endangered, and this event has killed off three percent of the estimated 650 individuals that remain. Officials are searching the Gir Forest to locate lions from other prides living near the affected animals so that they can be isolated.

After the first 11 lions died, forest officials speculated that most of the deaths were the result of “infighting,” which is when an outside group of lions attacks in a battle over territory. However, the discovery of three dead female lions seemed to contradict this theory.

Male lions involved in a rivalry over hunting grounds often fight to the death, but this would not explain what killed the lionesses. An investigation was launched into whether disease played a role in the fatalities.

Before the death toll reached 23, one forestry official told the Times of India: “Of the report of 21 deaths, four lions were confirmed to have died of canine distemper virus (CDV), while 17 succumbed to babesiosis protozoa infection carried by ticks found on most cattle and canines in the wild.”

India’s Supreme Court is calling for an inquiry into the deaths, including details on what preventative measures are being taken. The Gujarat High Court has called into question whether illegal big cat shows, where chicken is fed to wild lions, may have caused the fatal illnesses.

According to the BBC, 184 lions have died in the Gir Forest region since 2016, and only 30 of these deaths were due to unnatural causes such as being struck by a car or a train.