Diversity of land species has remained the same for 60 million years • Earth.com 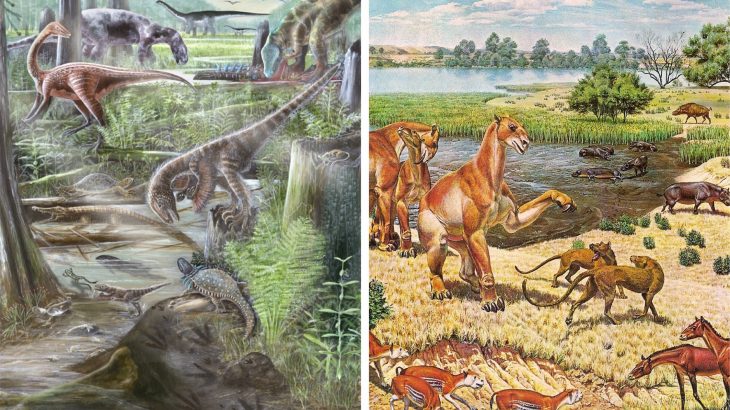 The amount of biodiversity we have on land today has remained the same for at least 60 million years, soon after the dinosaurs were wiped out. An international team of researchers led by the University of Birmingham has found that the number of species has increased only occasionally throughout time, with sudden spikes in diversity being followed by plateaus lasting tens of millions of years.

Scientists have previously theorized that diversity increased steadily throughout time, which would mean that biodiversity today is much greater than it was in prehistoric times. Modern computing techniques that are capable of analyzing hundreds of thousands of fossils are showing patterns of land diversity that challenge this theory.

The current study was focused on fossil data collected by palaeontologists over the past 200 years at around 30,000 different fossil sites worldwide. The fossil data represented land vertebrates dating back to the first evidence of this group nearly 400 million years ago.

The study revealed that it has been tens of millions of years since there was a significant increase in the average number of species. The research suggests that competition for food and space among land vertebrates limits the number of species that can coexist.

“Scientists often think that species diversity has been increasing unchecked over millions of years, and that diversity is much greater today than it was in the distant past,” said study lead author Dr. Roger Close. “Our research shows that numbers of species within terrestrial communities are limited over long timescales, which contradicts the results of many experiments in modern ecological communities – now we need to understand why.”

“Contrary to what you might expect, the largest increase in diversity within land vertebrate communities came after the mass extinction that wiped out the dinosaurs, 66 million years ago, at the end of the Cretaceous period,” Dr. Close added. “Within just a few million years, local diversity had increased to two or three times that of pre-extinction levels – driven primarily by the spectacular success of modern mammals.”

Study co-author Professor Richard Butler added, “Our work provides an example of the combined power of the fossil record and modern statistical approaches to answer major questions about the origins of modern biodiversity. By understanding how biodiversity has changed in the past, we may be able to better understand the likely long-term impact of the current biodiversity crisis.”