Dogs can be used to quickly and easily diagnose malaria • Earth.com 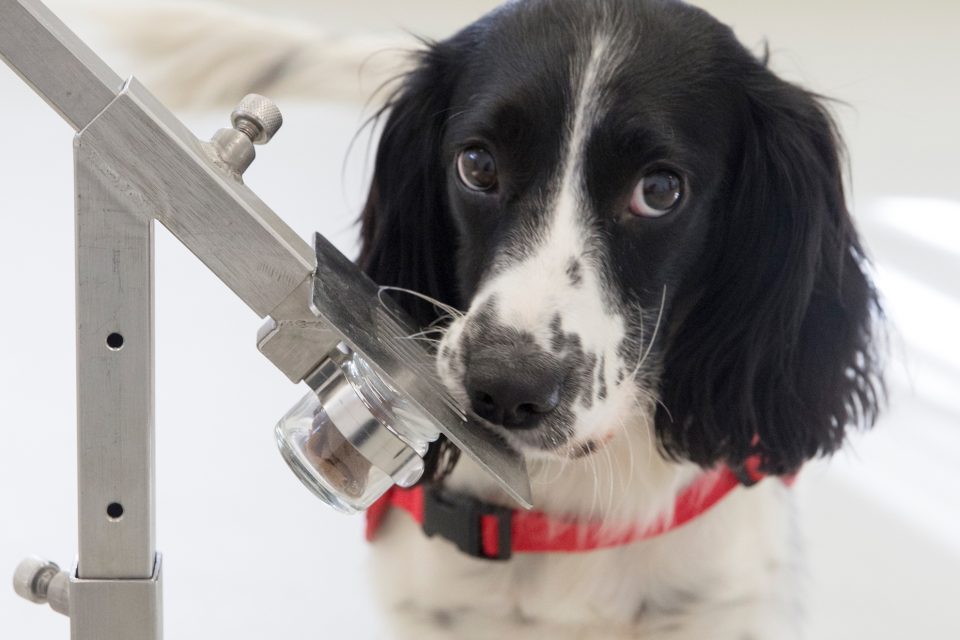 Dogs can be used to quickly and easily diagnose malaria

Researchers at Durham University are reporting that dogs could be trained to sniff out malaria in people. While investigating ways to prevent the spread of the deadly disease, the experts found that dogs could identify the scent of malaria in samples of socks worn by infected children.

The findings could ultimately lead to the first rapid, non-invasive test for malaria.

“There is no test diagnostic that is 100% effective,” Professor Steve Lindsay, study lead investigator, exclusively told Earth.com. “The best we have is Polymerase chain reaction (PCR)-based assays which can be used to identify very low densities of parasites, but this requires blood to be taken. It is too early to give costs for the dogs. But we see the dogs being used in malaria-free countries to help reduce the number of people carrying malaria parasites into the country. The cost of a malaria resurgence in a country that was once malaria free is huge.”

Even though the research is in its early stages, the scientists hope that trained sniffer dogs can help pinpoint infected people faster so that they can be treated more quickly, which would also help to keep malaria from spreading to other countries.

“While our findings are at an early stage, in principle we have shown that dogs could be trained to detect malaria infected people by their odor with a credible degree of accuracy,” explained study lead investigator  Professor Steve Lindsay.

“This could provide a non-invasive way of screening for the disease at ports of entry in a similar way to how sniffer dogs are routinely used to detect fruit and vegetables or drugs at airports.”

“This could help prevent the spread of malaria to countries that have been declared malaria free and also ensure that people, many of whom might be unaware that they are infected with the malaria parasite, receive antimalarial drug treatment for the disease.”

For the study, the researchers used nylon socks to collect foot odor samples from seemingly healthy children between the ages of 5 and 14 in the Upper River Region of The Gambia in West Africa. The children were also tested for the malaria parasite Plasmodium falciparum in their blood.

Using the sock samples, a Labrador-Golden Retriever and a Labrador at the Medical Detection Dogs (MDD) charity were trained to distinguish between the scent of children infected with malaria parasites and those who were uninfected.

“MDD have had positive results training dogs to detect diseases including cancer and diabetes sugar changes by odor. This is the first time we have trained dogs to detect a parasite infection and we are delighted by these early results,” said Dr. Claire.

“The possible potential to train dogs to detect tropical disease where diagnostics are poor, such as leishmaniasis and trypanosomiasis is huge. I believe that this study indicates that dogs have an excellent ability to detect malaria and if presented within an individual infected with the parasite or a piece of recently worn clothing, their accuracy levels will be extremely high. This is a reliable, non-invasive test and is extremely exciting for the future.”

Study co-author Professor James Logan is the Head of the Department of Disease Control at the London School of Hygiene & Tropical Medicine.

“Worryingly, our progress on the control of malaria has stalled in recent years, so we desperately need innovative new tools to help in the fight against malaria,” said Professor Logan. “Our results show that sniffer dogs could be a serious way of making diagnosis of people who don’t show any symptoms, but are still infectious, quicker and easier.”

The research, which was funded by the Bill & Melinda Gates Foundation, was presented at the American Society of Tropical Medicine and Hygiene Annual Meeting in New Orleans.