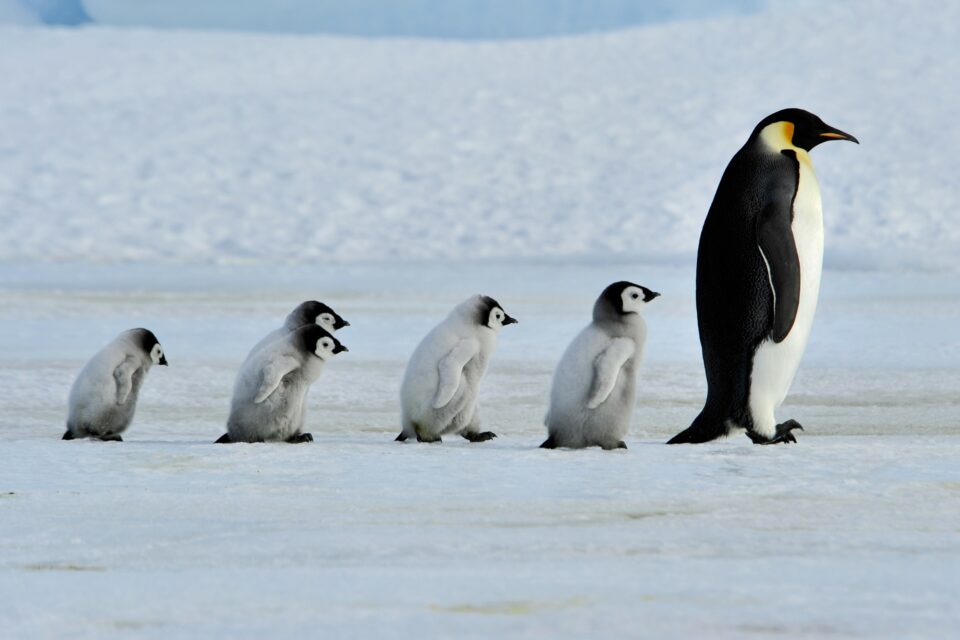 The results of a new study from the Woods Hole Oceanographic Institution suggest that emperor penguins are increasingly threatened by climate change and should be listed under the Endangered Species Act.

The researchers took a closer look at how rapid climate change is ramping up the frequency of extreme climate events, such as glacial calving and sea ice loss. The team also examined how these events may influence the risk of species extinctions.

The study was led by seabird ecologist Stephanie Jenouvrier and co-authored by an international, interdisciplinary team of experts.

“Scientists have a responsibility to make people aware of the need for change through objective evidence,” said Jenouvrier. “With the help of a dedicated team, we put together this paper for the USFWS to provide additional analyses of future projections and help inform policy and protection for the species.”

The researchers analyzed the projected dynamics of all emperor penguin colonies under different greenhouse gas emission scenarios. Unlike previous projections, the computer models used for this study accounted for the effects of extreme climate events.

The experts report that extreme climate events impact the resiliency, redundancy, and representation – the 3Rs – of emperor penguins.

The analysis shows that if sea ice declines at the expected rate, the 3Rs will be drastically reduced. As a result, almost all of the emperor penguin colonies would become quasi-extinct by 2100.

“Emperor penguins live in a delicate balance with their environment, there is a sea ice ‘Goldilocks’ zone,” said Jenouvrier. “If there is too little sea ice, chicks can drown when sea ice breaks up early; if there is too much sea ice, foraging trips become too long and more arduous, and the chicks may starve.”

“Given the species’ reliance upon sea ice for breeding, molting, and feeding, the most important threat for emperor penguins is climate change, which would lead to Antarctic Sea ice losses over this century,” explained Marika Holland a climate scientist with the National Center for Atmospheric Research.

“Trends in warming and consequential sea ice losses through the end of the century are clear and unidirectional under all projections from all climate models.”

According to Jenouvrier, this research provides the best available science for projecting emperor penguin populations in the context of future climate change.

“The future of this iconic species depends on immediate actions to decarbonize society and increased protections for species endangered by climate change.”