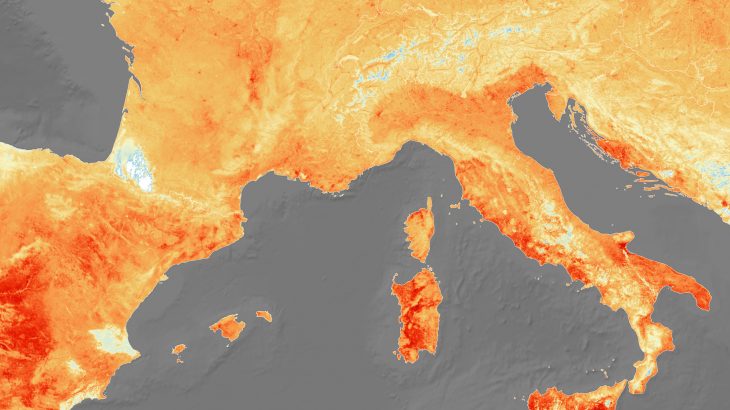 Less than a year after the 2018 European drought and heat wave, intense heat has struck the region again with record-breaking temperatures across France and Germany that are expected to rise even higher by the weekend.

“Many parts of Europe are experiencing the first heatwave of the year as a result of warm air masses from Africa, setting new daytime and overnight temperature records for June. The heat poses a risk to people’s health and the environment,” stated the World Meteorological Organization (WMO).

In northeastern Spain, 10,000 acres of forest and vegetation are on fire after a pile of manure spontaneously combusted as a result of the extreme weather. Officials are reporting that the blaze is the worst the Catalonia region has seen in 20 years and will be difficult to contain as temperatures are expected to hit 109 degrees Fahrenheit in the next couple of days.

Four southern regions of France have been placed under a red heatwave alert, the highest-level danger alert. A representative of France’s national weather agency, Météo-France, told the AFP that this is the first time since the warning system was established in 2004 that red alerts have been issued.

In August of 2003, France set a record for its hottest-ever temperature of 111°F during a heatwave that killed 15,000 people.

French officials warned on Thursday that “all members of the public should be concerned, even if they are in good health.” Météo-France predicts a peak of 113°F in the southern towns of Nîmes and Carpentras on Friday.

While the hottest temperatures have not yet arrived, 51 German weather stations have already recorded temperatures never seen before in June, according to the WMO.

“We’re talking about an exceptional, even unprecedented heatwave,” said LCI meteorologist Guillaume Woznica. “Temperatures are going to be near 104°F for most of the country and because it’s arriving at a particularly humid time of the year, it feels particularly unpleasant.”

Woznica said the timing of the heatwave makes it historic. “We’re only one week into summer officially. To have such a widespread, long-lasting, intense heatwave before July is simply unheard of.”