Humans did not cause the extinction of prehistoric African animals • Earth.com 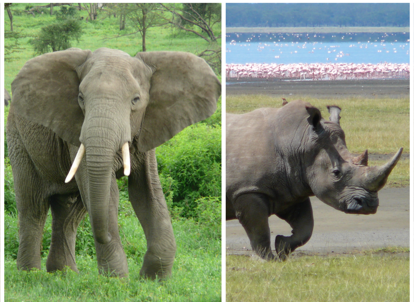 Humans did not cause the extinction of prehistoric African animals

A team of researchers have discovered that early human ancestors are not to blame for the extinction of large prehistoric African mammals. This revelation, published in the journal Science, directly contrasts what scientists have believed for over half a century.

Many have speculated that the disappearance of giant mammals over the last 50,000 years must have began in Africa due to the fact that our homo sapien ancestors were in Africa long before any other continent.

However, this has been proven false. The research team focused their attention on megaherbivores, the largest prehistoric mammal species weighing in at over 2,000 lbs. They compared a seven-million-year-record of African extinctions to milestones in human evolution, such as the development of stone tools, mammal butchery, and the evolution of homo erectus, which have all been previously linked to large mammal extinctions.

Researchers found that extinction of megaherbivores in Africa was a completely independent process. What’s more is that their decline actually began 4.6 million years ago, a time before tool-wielding human ancestors roamed the earth. The only known hominem of that time is Ardipithecus, an ape-like human ancestor with a small-sized brain and hunting skills similar to that of chimpanzees.

One team member from the University of Massachusetts Amherst, 2018 University of Arizona doctoral graduate John Rowan, said, “If hominins were responsible for the extinction of megaherbivores, we would expect their decline to be more step-like and to track behavioral or adaptive milestones in human evolution. It is instead gradual — playing out over nearly five million years — long before the appearance of any hominin remotely capable of taking down rhino- or elephant-sized prey.”

“This suggests to our research team that widespread impacts on the large mammal species and terrestrial ecosystems might be unique to us — Homo sapiens.”

Instead, the researchers believe megaherbivores met their demise due to environmental change. Falling atmospheric carbon dioxide and the replacement of trees and shrubs with grasslands led to the extinction of tree-browsing mammals.

“Human impacts on Earth’s biodiversity have been significant and sometimes catastrophic,” Rowan said. “In this case, at least, our ancestors are not to blame. This is very clearly a long-term, bottom-up loss of diversity related to broader events in Earth’s climate and environments over the last several million years.”