Female monkeys use males as "hired guns" for protection • Earth.com 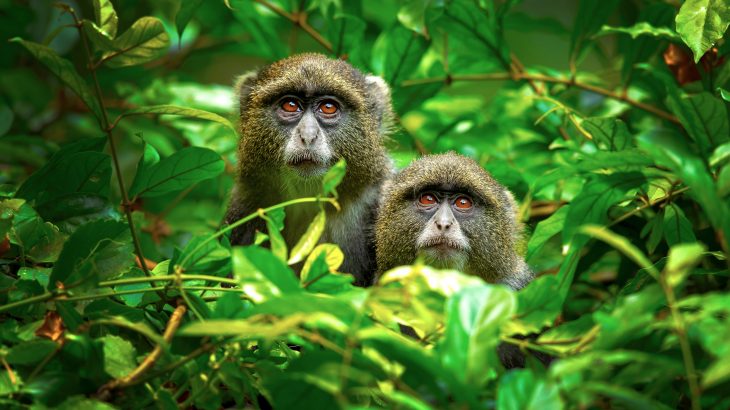 Female monkeys use males as “hired guns” for protection

A team of researchers at the Wildlife Conservation Society (WCS) has discovered that a group of female monkeys use males as “hired guns” for protection.

The experts report that female putty-nosed monkeys use specific alarm calls to recruit males for protection when leopards and other predators are nearby.

The research was focused on 19 different groups of wild putty-nosed monkeys in Mbeli Bai, a study area within the forests in Nouabalé-Ndoki National Park, Northern Republic of Congo.

The results support the idea that female alarm calls require males to assess the nature of a threat. The study also confirms that the calls are used to recruit males for defense.

The researchers noted that the female alarm calls do not cease until males produce calls associated with anti-predator defense.

The observations suggest that alarm-calling strategies depend on the sex of the signaler. Females recruit males for protection, while males reassure the females that they are adequately protected. The male strategy likely ensures future mating opportunities as well.

When they are called upon for defense, the males use general “pyow” calls as they approach the rest of their group. These calls allow the female monkeys to recognize individual males, including the most high quality group defenders, from a distance.

The signature “pyow” calls likely contribute to long-term male reputation in groups, as females prefer mates that can reliably protect their offspring.

“Our observations on other forest guenons suggest that if males do not prove to be good group protectors, they likely have to leave groups earlier than good defenders,” said study lead author Frederic Gnepa Mehon.

“To date, it remains unclear whether female guenons have a saying in mate choice, but our current results strongly suggest this possibility.”

During the study, a new type of call was consistently recorded named “kek.” The experts found that the males used the “kek” call when exposed to a moving leopard model created by researchers for field experiments.

According to the study authors, the findings advance our understanding of different female and male alarm calls. Males have more complex vocal ranges than females. However, the cognitive skills needed to effectively utilize simple female ranges are much more complex than those needed for male calling strategies.

“In a phylogenetic context, what strategies ultimately drove the evolution of communication in females and in males? Might there even be any parallels to female and male monkeys’ different communication strategies in human language?”