First vegetarian shark found who only feeds on seagrass • Earth.com 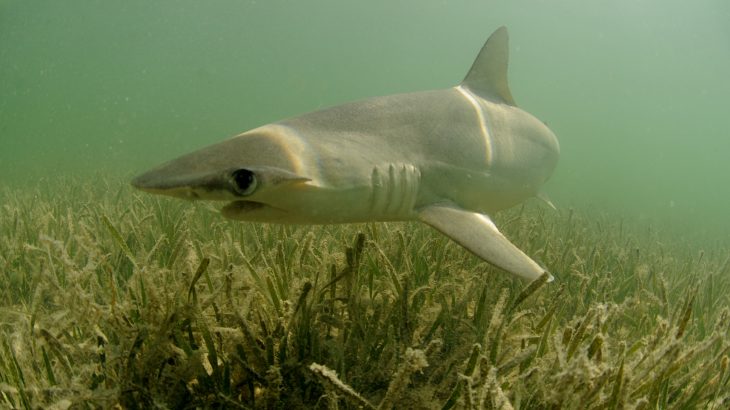 First vegetarian shark found who only feeds on seagrass

It has been widely assumed that sharks are strictly meat-eaters, but a new study has identified a shark species that can live on a plant- or a meat-based diet. The bonnethead shark, Sphyrna tiburo, is a relatively small hammerhead shark found in coastal waters around the United States. Scientists have now established that the bonnethead is a flexitarian, or a semi-vegetarian.

Around a decade ago, it was discovered that bonnethead sharks consume massive amounts of seagrass. In fact, more than 62 percent of their stomach contents have been found to contain seagrass in previous research.

However, scientists thought that the ingestion of seagrass was unintentional, occurring by mistake when the bonnetheads were hunting for their prey in shallow waters. It was not yet known that the bonnetheads could actually digest the seagrass for nourishment.

Study lead author Samantha Leigh is an expert in Ecology and Evolutionary Biology at the University of California, Irvine.

“It has been assumed by most that this consumption was incidental and that it provided no nutritional value,” Leigh told The Guardian. “I wanted to see how much of this seagrass diet the sharks could digest, because what an animal consumes is not necessarily the same as what it digests and retains nutrients from.

The study revealed that five bonnethead sharks were digesting over half of the organic material found in the seagrass.

“Bonnethead sharks are not only consuming copious amounts of seagrass but they are actually capable of digesting and assimilating seagrass nutrients, making them clear omnivores,” wrote the study authors. “This is the first species of shark ever to be shown to have an omnivorous digestive strategy.”