Flashing fireflies and the complexity of out-of-sync networks • Earth.com 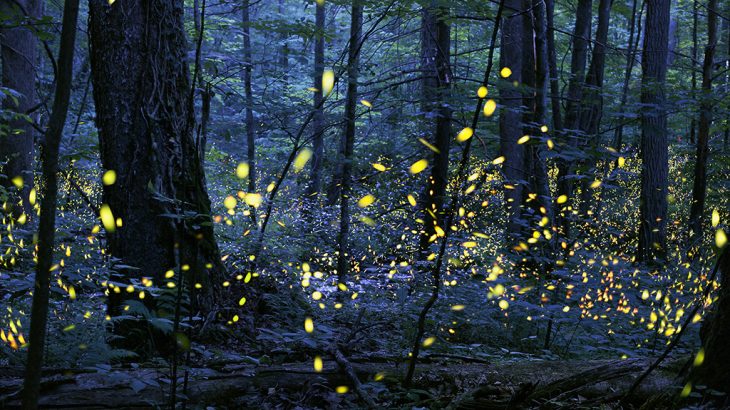 Flashing fireflies and the complexity of out-of-sync networks

How is it that fireflies are able to suddenly synch up and send out simultaneous signals together in unison? And what would it take for this structure to be disrupted?

Researchers from the California Institute of Technology have demonstrated how a network of identical synchronized nanomachines can create out-of-sync states which interrupt self-organizing syncing behavior.

Their findings and understanding of how synced behavior can be disrupted could lead to new technology that can help control synced networks.

The research was published in the March 8th issue of Science.

“We want to learn how we can just tickle, or gently push, a system in the right direction to set it back into a synced state,” said principal investigator Michael L. Roukes, the Frank J. Roshek Professor of Physics, Applied Physics, and Bioengineering at Caltech. “This could perhaps engender a form of new, less harsh defibrillators, for example, for shocking the heart back into rhythm.”

Synchronized oscillation, that being the phenomenon during which two or more entities naturally begin to move, tick, and operate in unison, has been studied for hundreds of years. When two or more entities (nodes of the network) begin to operate at the same time, they send out repeated signals. These nodes must also be connected in some way, via network edges, to communicate and send messages about their states.

More recently, scientists have noticed that these networks can also flip out of sync and evolve their own complex patterns. To figure out why and how this happens, Roukes and his team set up networks of oscillating nanomechanical devices. They first connected just two and ended up with a network of eight. It was this eight-node system that evolved into various complex states.

“This is the first experimental demonstration that these many distinct, complex states can occur in the same simple system,” said co-author James Crutchfield, a University of California, Davis physics professor and a visiting associate in physics at Caltech.

Roukes used the incredibly in-sync Rockettes as a metaphor for what was happening. The first out-of-sync observation was similar to if every other Rockette was kicking their leg, however it became much more complex.

“The perplexing feature of these particular states is that the Rockettes in our metaphor can only see their nearest neighbor, yet manage to be coordinating with their neighbor’s neighbor,” said lead author Matthew Matheny, a research scientist at Caltech.

“These exotic states arising from a simple system are what we call emergent,” Roukes said. “The whole is greater than the sum of the parts.”

The team wants to explore what complexities occur when more than eight nodes are added to the network. The more information known about these complexities and how they evolve can help develop new ways to control them in the future, and perhaps, begin to understand how these networks operate within the brain.

“Decades after the first theories of the science of sync, and we are just finally beginning to understand what’s going on,” Roukes added. “It’s going to take quite a while before we understand the unbelievably complex network of our brain.”