Forest fires cause snow to melt earlier in the western U.S. • Earth.com 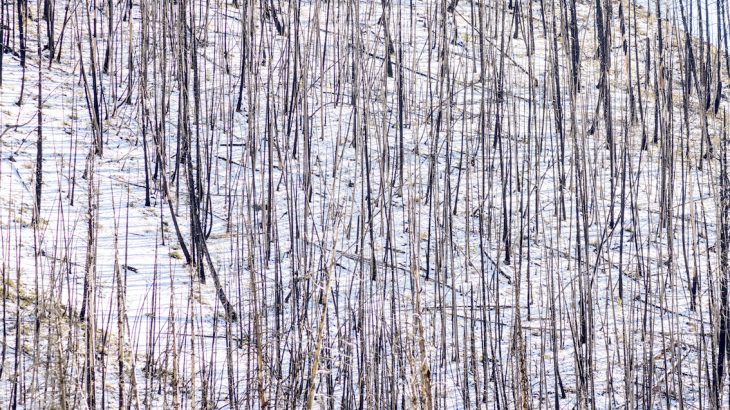 Forest fires cause snow to melt earlier in the western U.S.

According to researchers at Portland State University (PSU), the Desert Research Institute (DRI), and the University of Nevada, Reno, forest fires are accelerating snow melt in western areas of the United States. If a drier, warmer climate continues to exacerbate forest fires, his phenomenon could affect water supplies and could even trigger additional, more severe forest fires.

“This fire effect on earlier snowmelt is widespread across the West and is persistent for at least a decade following fire,” said lead author Kelly Gleason, an assistant professor of environmental science and management in PSU’s College of Liberal Arts and Sciences.

Using snow samples taken by DRI’s Ultra-Trace Ice Core Analytical Laboratory in Reno, Nevada, alongside radiative transfer and geospatial modeling, Gleason and her colleagues determined that snow melts an average five days earlier after a fire than before, and that accelerated melting time continued for up to 15 years.

This is because the fire effectively removes the tree canopies that shade the snow, allowing more sunlight to melt the snowfall. And the soot (black carbon) caused by the fire darkens the snow and makes it more reflective.

“Snow is typically very reflective, which is why it appears white, but just a small change in the albedo or reflectivity of the snow surface can have a profound impact on the amount of solar energy absorbed by the snowpack,” said co-author Joe McConnell, a research professor of hydrology and head of the Ultra-Trace Ice Core Analytical Laboratory at DRI. He added, “This solar energy is a key factor driving snowmelt.”

This is bad news for any western states that rely on snowmelt runoff into local streams for their water supply.

“The volume of snowpack and the timing of snowmelt are the dominant drivers of how much water there is and when that water is available downstream,” Gleason said. “The timing is important for forests, fish, and how we allocate reservoir operations; in the winter, we tend to control for flooding, whereas in the summer, we try and hold it back.”

“Snow is already melting earlier because of climate change,” she continued. “When it melts earlier, it’s causing larger and longer-lasting fires on the landscape. Those fires then have a feedback into the snow itself, driving an even earlier snowmelt, which then causes more fires. It’s a vicious cycle.”