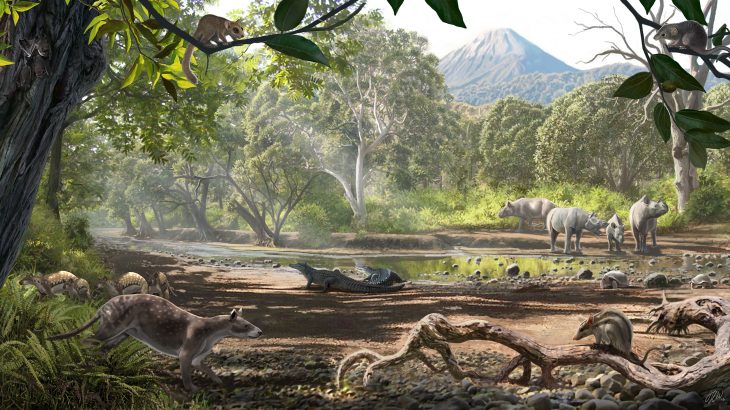 A study led by the University of Kansas is describing how a unique island ecosystem evolved 43 million years ago during the Eocene Epoch. The research is focused on two new fossil relatives of marsupials that inhabited the Pontide region of modern-day Turkey.

“Evolution in many ways is easier to study in an island context than on a large continent like North America because it’s a simpler ecosystem,” said study co-author Professor K. Christopher Beard.

“Evolutionary biologists have been focusing on islands ever since Darwin and Wallace independently formulated their ideas about evolution based on their observations of plants and animals living on the Galapagos and the Malay archipelago, which is modern Indonesia.”

According to Professor Beard, however, the lack of a fossil record for animals living on islands across a multimillion-year timeframe  has largely prevented the opportunity to understand how island ecosystems are constructed.

“No other ecosystem on the face of the planet from any time period matches what we’re finding in the Eocene of Turkey – it’s a completely unique mammalian ecosystem much like Madagascar is today.”

“But how did this island biota develop over time? You need fossils and time depth to see that. We’re able here to study in great detail how this ancient island evolved – where the different animals came from, how they got there and when they got there. Once they got there, some of these mammals, including one of the new marsupial lineages we’ve discovered, were able to diversify on the island. Most of the Eocene mammals on the Pontide island seem to have gotten there by swimming or rafting across parts of the Tethys Sea, instead of getting stranded on the island when it got separated from adjacent parts of Eurasia.”

The team found evidence among the Pontide marsupial fossils that distinctive forms of life on islands are ill-fated in general, given enough time.

“One thing we know for sure is that the incredibly interesting and unique Eocene biota that occurred on this island in what is now Turkey at some point was totally eradicated,” said Professor Beard. “It was eradicated when the island was re-connected to mainland Eurasia and more cosmopolitan animals were able to access it for the first time, driving the weird island biota to extinction.”

“The message for conservation biology today is that island ecosystems are inherently ephemeral on the grand scale of macroevolutionary time. Today, conservation biologists are concerned about many endangered taxa on islands. The ugly truth that paleontology provides is that, given enough time, most island faunas are doomed to extinction. They’re cul-de-sacs of evolution – even though they’re wonderful places to study processes of evolution.”