Foxgloves rapidly evolved in the presence of hummingbirds • Earth.com 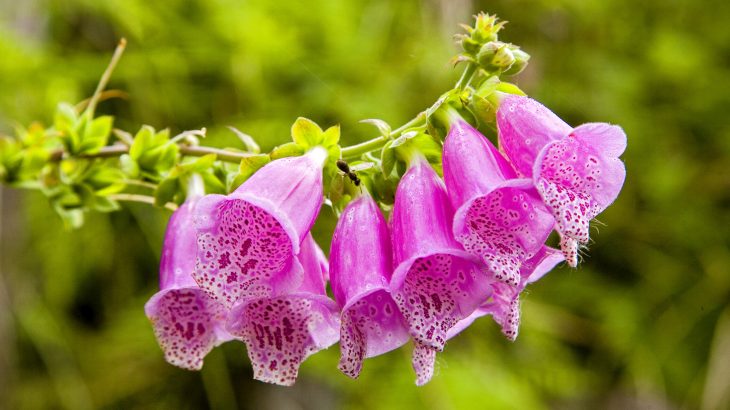 In a new study published by the British Ecological Society, experts report that foxgloves rapidly changed the length of their flowers after arriving in North and South America. The researchers believe the foxgloves evolved to accommodate their new pollinators, hummingbirds.

The common foxglove, Digitalis purpurea, is native to Europe where it is pollinated by bumblebees. The researchers have shown, for the first time, how flowering plants can respond to a new environment – and the presence of a new pollinator – with rapid physical changes.

The experts compared foxgloves in the UK with foxgloves that were independently introduced to Costa Rica and Colombia around 200 years ago. In the Americas, the flowers are pollinated by both bumblebees and hummingbirds.

The study revealed that the base of the cone structure of the flowers, the proximal corolla tube, was up to 26 percent larger among foxgloves in Colombia and Costa Rica.

The long proximal corolla tubes found on foxgloves hold the nectar. Due to the narrow shape of the tubes, the only types of pollinators that have access are those with long mouthparts such as long-tongued bumblebees.

“We found foxglove populations in Costa Rica and Colombia now have flowers with longer tubes at the base, when compared to native populations. There is also substantial natural selection on this floral characteristic in the naturalized populations,” said study co-author Dr. Maria Clara Castellanos at the University of Sussex.

“Long corollas are a common feature in many hummingbird-pollinated plants, likely because this improves the precision of pollen transfer during the pollination interaction. It is also possible that long corolla tubes exclude other pollinators that are less effective.”

The experts confirmed that hummingbirds are effective foxglove pollinators. “We counted pollen grains deposited in flowers and found that after a single visit they can bring in more pollen than a bumblebee.” said Dr. Castellanos.

The research also confirms that introducing plants to new environments is a good way to study the evolution of floral structures. Scenarios like this will occur more often as humans influence the range of plants and pollinators, noted the study authors.

“Our research shows how rapid evolutionary change in a new environment can be an important force behind the extraordinary diversity of flowers,” said Dr. Castellanos.

The researchers said that while the changes observed in foxgloves are consistent with changes that hummingbirds have imposed on the native plants they pollinate, the study does not prove that the birds directly caused the rapid changes found in the flowers. The experts emphasized the importance of studying other plants in this context.

“Plants around the world are experiencing changes in their pollinators and it is important to understand the evolutionary implications of this,” said Dr. Castellanos.