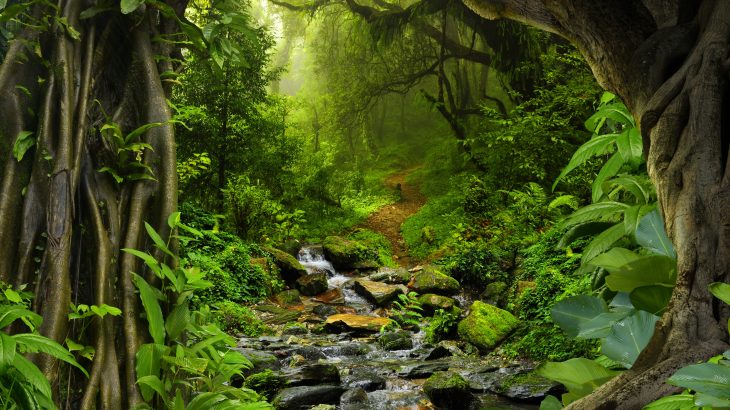 The regrowth of Amazon rainforests is stunted by gold mining, according to a new study from the University of Leeds. The researchers found that the effects of mining are long-lasting and greatly reduce the ability for the forests to store carbon.

In recent years, gold mining has rapidly expanded across the Amazon. Mining is responsible for as much as 90 percent of total deforestation along the Guiana Shield, where forests store roughly twenty billion tons of carbon.

The researchers estimate that mining-related deforestation results in the annual release of over two million tons of carbon throughout the Amazon. The lack of recovery observed in the study suggests that the carbon cannot be recaptured through natural means.

The team found that forest recovery rates on abandoned mining pits are some of the lowest ever recorded for tropical forests. Even three to four years after mining had ceased, some sites showed little to no evidence of tree regeneration.

“Our results clearly show the extraction process has stripped nitrogen from the soil, a critical component to forest recovery, and in many cases directly contributed to the presence of mercury within neighboring forests and rivers. Active mining sites had on average 250 times more mercury concentrations than abandoned sites.”

“Not only does this have serious consequences for our battle against global warming by limiting Amazonian forests’ ability to capture and store carbon, but there is also a larger implication of contaminating food sources especially for indigenous and local communities who rely on rivers.”

“A positive finding from this study shows that overburden sites, areas where topsoil is deposited during the mining process, recorded similar recovery rates as other Central and South American secondary tropical forests abandoned after agriculture or pasture.”

Dr. Kalamandeen emphasized that active management and law enforcement is needed to guarantee recovery and to safeguard communities. There are methods available, she said, but there is an urgent need for large-scale recovery management to be tested and implemented.

“We could be facing a race against the clock. The current crisis is significantly increasing the demand for gold, given its perceived role as an economic stabilizer.”

“With current gold price more than US$1700 per ounce and estimated to reach US$2000-3000 in the coming months, many artisanal and small-scale miners are already rapidly responding to this increase in pricing, and the weakening of environmental laws and policies as we’ve seen in Brazil, leading to further deforestation in the Amazon.”

The analysis of soil samples from recently abandoned mines revealed that forest recovery is even more limited by severe depletion of soil nutrients like nitrogen than it is by mercury contamination.

“This research provides support to local and national governance structures to critically approach policy implementation and development for land management, including how and where mining occurs, and more stringent monitoring and action for forest recovery. It shows that carefully planned active restoration projects will be critical in this regard.”

“But responsibility lies beyond remediation efforts to mitigate the damage done. Investors and consumers alike need increased awareness and accountability of the environmental footprints of gold mining.”