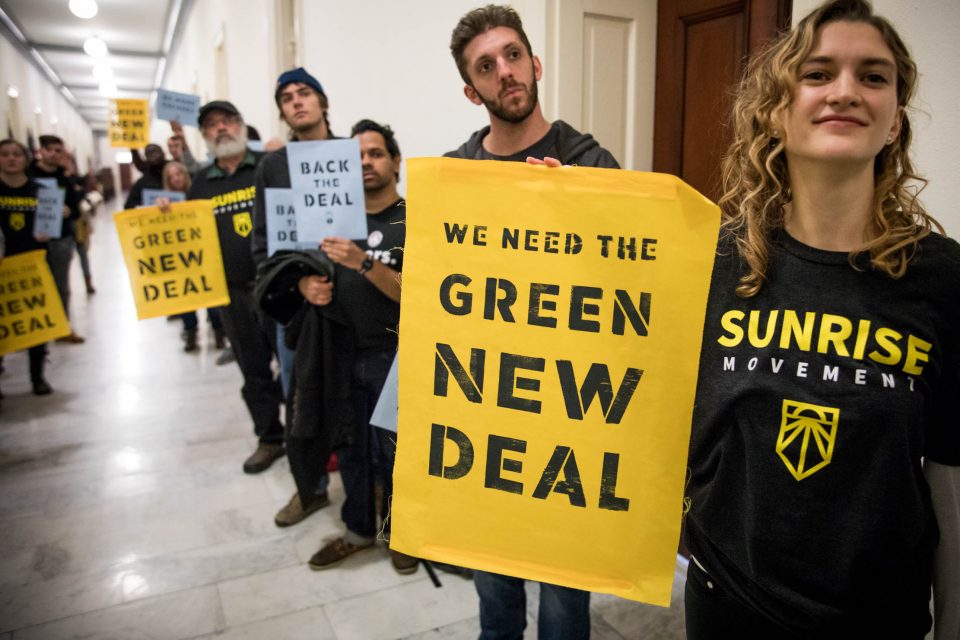 The proposed Green New Deal of course references FDR’s famous New Deal that put many Americans back to work and jump started the economy after the Great Depression. Some of the most obvious and lasting aspects of the New Deal are reflected in the work done by the Civilian Conservation Corps (CCC).  Historic buildings and other infrastructure at parks are small monuments to the CCC and work done under the New Deal. Today, the Green New Deal is also quite bold and ambitious, but what exactly does it include?

The Green New Deal is an unbinding resolution proposed by freshman lawmaker Alexandria Ocasio-Cortez. The bill begins with a straightforward list of the problems associated with global climate change and the possibility of a 2 degree Celsius rise in temperature.  It also outlines the environmental and economic problems caused by or projected to be caused by climate change now and in the near future Highlights of the problems that the two degrees change are projected to cause include loss of 99% of the world’s coral reefs and the exposure of 350 million more people to deadly heat stress.  The deal then asserts the necessity of keeping climate below a 1.5 °C change above pre-industrial levels.

Ocasio-Cortez is a popular target for conservatives, many of which fully deny the validity of climate change science. As such, the right wing has already begun lambasting the resolution.  Conservatives have taken to social media with pictures of grilling beef over a comment on farting cows in a document accompanying the proposed Green New Deal itself.  A Fox News contributor actually joked that the Green New Deal could lead to cannibalism.  More serious criticism has come from Republicans and even Speaker of the House Nancy Pelosi, who called it the ‘green dream’ before embracing it.

The US is responsible for a large part of greenhouse gas emissions.  We also have plenty of problems at home, connected directly and indirectly to environmental destruction.  A declining life expectancy and inadequate access to clean air, water, healthy food, healthcare, housing and other essentials are tackled in the Green New Deal.  Inequality on the basis of gender and race are all connected to the unequal suffering caused by environmental catastrophe. As I’ve previously reported, pollution disproportionally hurts people of color and other underprivileged groups.

As a solution, The Green New Deal calls on a new mobilization, the creation of a new, more inclusive middle class, empowered by new green jobs and technologies.  Investments in infrastructure and a transition for all communities to a new green economy are also called for. The Green New Deal would secure for all Americans, clean air and water, climate and community resilience, healthy food, access to nature, and a sustainable environment.

The resolution aims to “promote justice and equity by stopping current, preventing future, and repairing historic oppression of indigenous peoples, communities of color, migrant communities, deindustrialized communities, depopulated rural communities, the poor, low-income workers, women, the elderly, the unhoused, people with disabilities, and youth (referred to in this resolution as ‘frontline and vulnerable communities’).”

There are a few real world solutions outlined – that any infrastructure bill before Congress would also address climate change, expanding and upgrading renewable energy and investing in a more efficient ‘smart’ power grid for all public electricity.  Family and sustainable farming would be supported under the plan and the resolution proposes the government work with farmers to limit pollution and climate change. Restoring and preserving natural environments as proven low-tech solutions to climate change are also called for.

Promotion of an international trade in technology and ideas is also suggested as a way to support innovation in tackling environmental challenges.  The proposal calls for economic justice, good jobs and honoring agreements with indigenous leaders.

The Green New Deal didn’t specify anything about red meat, but according to the Pacific Standard, Ocasio-Cortez did say in an interview, “maybe we shouldn’t be eating a hamburger for breakfast, lunch, and dinner” while also specifically saying she didn’t want to get rid of agriculture.

Meat consumption and food waste are real problems for the environment, as I’ve previously reported.  It’s hard to really think eating less red meat than the average American is a bad suggestion.  The US is also plagued with obesity and diabetes, both problems that can be partially alleviated by diets with less meat.  Meat production of course also contributes greenhouse gases.

But the most substantial criticisms of the Green New Deal boil down to specifics. The bill as it stands does leave a lot left up to the imagination, as it is little more than a bill of hopes for our country and the world.  As such, it mainly demands equality and health for people and the environment they live in. One sentiment echoed by many is that we can’t afford it. The main question we must ask ourselves is how can we afford not to secure our own lives and the lives we share earth with?

The Green New Deal is pretty open, though, leaving room for thought, innovation, even criticism for any who want to work for a better world or even those who wish to hold on to what’s good in this one.