Horses use their tails to blow flying insects away • Earth.com 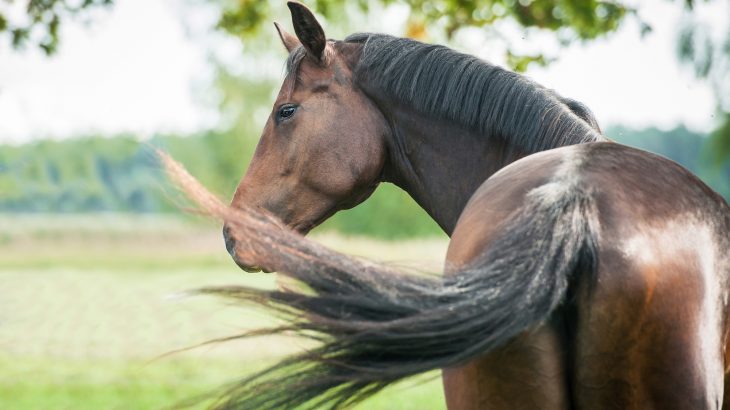 Horses use their tails to blow flying insects away

Researchers at the Georgia Institute of Technology have discovered that animals swish their tails in order to produce a breeze to keep pesky, and often hazardous, flying insects away.

Study co-author Marguerite Matherne explained, “Most people assume that horses and other mammals swing their tails as some kind of deterrent for bugs; we wanted to provide scientific evidence for this claim.”

Matherne conducted research at the stables where she had ridden as an undergraduate to film horses swishing their tails while under attack. She also visited Zoo Atlanta to record the tails of other animals, ranging from zebras to elephants.

In the lab, co-authors Kasey Cockerill and Mihir Bellamkonda digtally broke down the movements of each animal’s tail into a jointed pendulum, with the skin and bone portion forming the upper pendulum and the hairy tassel forming the lower. When Matherne calculated the natural frequencies at which the animals should swing their tails, she was surprised to find that the horses were swinging their tails three times faster and using 27 times more energy.

The team speculated that animals may be swinging their tails faster to intercept more insects. The problem with this theory was that, even at its top speed, the horse’s tail could only intercept about one insect every 90 seconds. But then, the experts tested out a whip made from horse hair and noted that mosquitoes would take flight even when the whip just breezed by them.

To investigate whether the tails were generating a breeze that was strong enough to repel insects, Matherne constructed a robot tail and documented the effects as mosquitoes flew close.

The study revealed that the fake tail successfully deterred 50 percent of the pests. Furthermore, the insects seemed unaware of the model until they were close enough to feel the wind as it veered them away.

“Animals swish their tails at a speed that generates a small air flow, which is enough to blow mosquitoes away before they even reach the body,” said Matherne. According to the researchers, this explains why they invest so much energy whisking their tails around

The study suggests that cosmetic tail docking may be more of a risk to the welfare of animals than previously realized. “Shortening the tail length would inhibit a horse’s ability to shoo away hazardous biting insects,” said the researchers, leaving them more vulnerable to blood loss and infection.