How parasitic plants survive with no body • Earth.com 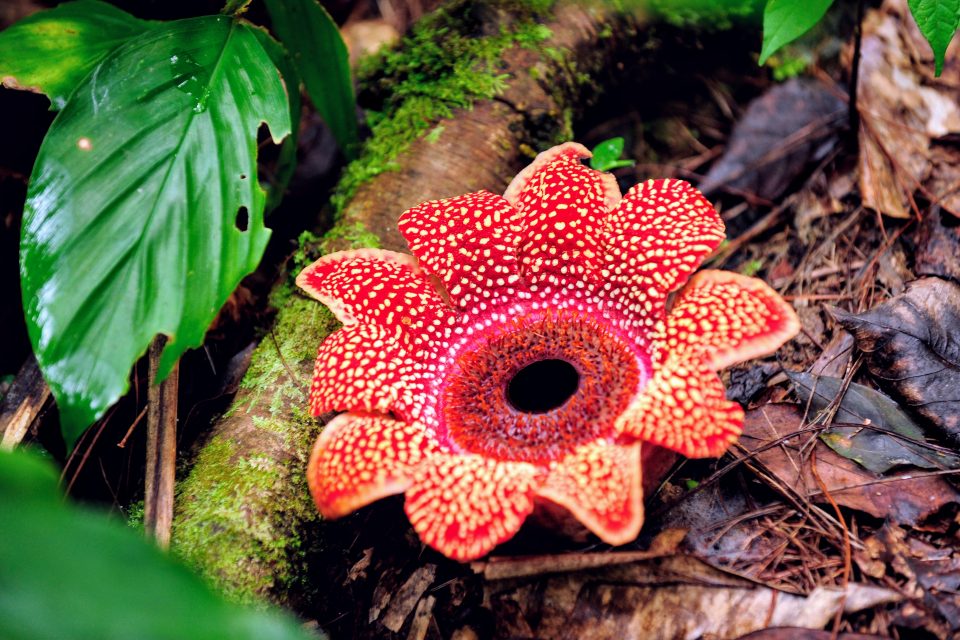 How parasitic plants survive with no body

Scientists have assembled the most complete DNA sequence of mysterious parasitic plants to date. The genomic analysis of Sapria himalayana has revealed that the flowering plant steals a surprising amount of genes from its host to survive. The researchers found that Sapria also experienced a large degree of gene loss as they abandoned their bodies and adapted to life as extreme parasites.

Sapria belongs to a family of rare parasitic plants in Southeast Asia known as Rafflesiaceae. These plants are endoparasites that have no roots, stems, or leaves of their own and depend entirely on a host plant for nutrients. Sapria is invisible for most of its life, living as cells inside of a host before emerging as a large flower.

The bright red and white flower of Sapria is small in comparison to its famous relative, Rafflesia arnoldii, which produces giant blossoms that are nearly three feet in diameter. The plants in the Rafflesiaceae family have flowers with a pungent odor similar to rotting meat. This is a strategy that has evolved to attract carrion flies for pollination and reproduction.

The genomic analysis is providing brand new insight into the elusive lives of Sapria, which have been challenging for scientists to study considering that they have no body.

The researchers discovered that nearly half of all genes found in most flowering plants are absent in the Sapria genome. This is more than four times the degree of gene loss found in other parasitic plants. Many of the genes that are lost are those involved in photosynthesis.

Study lead author Charles Davis is a professor of Organismic and Evolutionary Biology at Harvard University.

“In many ways, it’s a miracle that these plants exist today, let alone that they seem to have persisted for tens of millions of years,” said Professor Davis. “They’ve really jettisoned many things we identify as a typical plant yet they are deeply embedded within the plant tree of life.”

Despite evolving separately, Sapria and the parasitic plants they were compared to had lost many of the same types of genes. This demonstrates an underlying evolutionary convergence to becoming a parasite, explained the researchers.

“We concluded that there is a common genomic or genetic roadmap to how plant parasites evolve,” said Dr. Cai Liming of UC Riverside.

The experts said putting together the genome was like assembling a puzzle that had millions of pieces. They estimate that about 40 percent of the genome has now been sequenced and believe that the remaining portions are likely replicas of what they have pieced together thus far.

The team identified dozens of genes present in the Sapria genome that had been acquired through a process called horizontal gene transfer. This essentially means that the parasitic plants steal DNA from their host instead of passing it down across generations.

When the experts reconstructed the horizontal gene transfers, they assembled a hidden history of former hosts going back millions of years.

“The project was really an illustration of how these new sequencing technologies are really opening up the possibility of addressing questions that were just not feasible to address before, particularly in plants which have a really wide diversity of these sorts of weird genomes,” said study co-author Timothy Sackton.

“These are easily the most charismatic and strange of all flowering plants,” said Professor Davis. “They’re just so bizarre.”

The research was supported by funding from the National Science Foundation.