Human-made borders can have lasting effects on the natural world • Earth.com 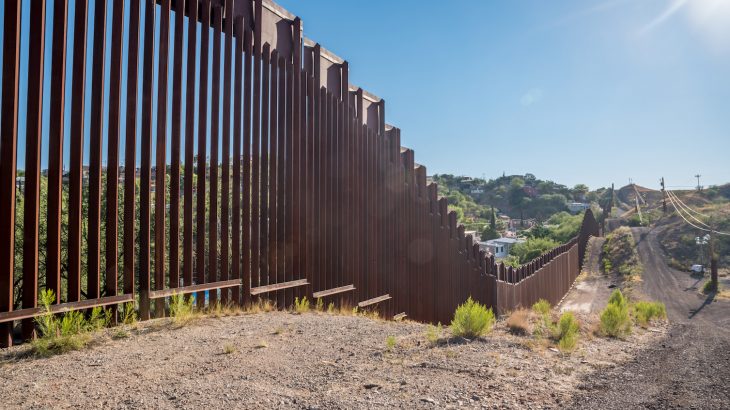 Human-made borders can have lasting effects on the natural world

The oldest horse fossils we can find are from North America.  When Europeans arrived in the Americas, horses had already moved across the Bering land bridge and made a home in Europe and Asia. Europeans of course brought their horses with them.

Camels appear to have first evolved in North America as well.  The lineage of camels split, with some migrating south, through Central America and into the Andes where they evolved into llamas.  Other camels crossed the land bridge and ended up as two species that can still be found in Africa and Asia. These stories of movement and evolution are common.

Many animals and plants have deep evolutionary roots far from where they are found today.  Some biological lineages, such as birds, have simply spread across the world, evolving different forms and strategies to accommodate different environments.  Given enough time, the movement of organisms is one across the entire planet that shifts with the slow movement of continents themselves.

You can see related and similar plants and animals mirroring each other in Africa and South America.  There’s a reason that hornbills and toucans look similar even though they live so far apart today. Movements from one place to another continue today just at a pace that’s hard to appreciate from the point of view of a short human life span.  Obviously, even our own species has moved across the globe, colonizing almost every livable spit of land. It’s only relatively recently with strict political borders that migrations human and otherwise have been put under so much pressure to halt.

I previously reported on the fluidity of movement across the US-Mexico border by animals and parks that align with each other on both the Mexico and the US side of the border.  Earth.com has reported many times on the consequences that Trump’s proposed border wall would have on wildlife.  In August 2017, we reported that 100 endangered species would be threatened by the building of a border wall between the US and Mexico.  The problem goes even deeper than that, though. Barriers can shape evolution. Rivers, mountains, canyons, even deserts all act as natural barriers and have created the formation of different species.  To survive and thrive, lineages of organisms must travel and spread their genes across broad areas.

National Geographic reports that birds have 247 families and 10,731 species, the largest diversity in vertebrates besides fish, of which there are more than 33,000 species of fish globally, according to Fishbase.  Why birds and fish are so diverse and found globally isn’t completely understood.  It does seem like diversity and widespread distribution go hand in hand to a certain degree.  Fish and birds have one thing in common besides a backbone – the ability to move long distances, through the oceans and skies respectively.  It seems likely that the ability of these animals to transport themselves long distances is related in some ways to their diversity.

Bats, like birds, can disperse over long distances and are the second most species rich mammal order.  Whales are also part of one of the six most species rich orders within mammalia. Of course, the picture is a bit complicated.  Rodents don’t seem to have any special ability to spread across the world and there are more species of rodents than bats. Other groups of mammals are so diverse because they’re isolated.  Tenrecs in Madagascar are diverse because they arrived on an island with few species and were able to adapt to many wide open niches until there were 29 species of tenrec, most of them on Madagascar.  Over the long term, barriers like mountains, canyons, or walls affect diversity, evolution and ecology.  The ability to move often constitutes survival.

When habitat conditions such as prey availability or climate are changed, many animals have no other choice but to move to habitat with better conditions.  Jaguars have slowly been seen moving north into the United States. It’s unclear why exactly, but it could be that conditions are slowly becoming less favorable to the big cats south of the border and moving north is a means of survival.

To pretend like a barrier, especially one that cuts off most of North America from Central America, won’t affect the entirety of the mainland Americas is simply incorrect.  On the other side of the issue, it’s unlikely the border wall will last more than a metaphorical blink of an eye in geologic time, and it seems unlikely it will really have any lasting effect on evolution.  It isn’t impossible though.

A study from 2003 suggests that the Great Wall of China actually had an effect on evolution.  The study looked at gene flow between five plant species that live on each side of the wall.  The researchers found that there was a greater difference in diversity between populations divided by the wall than control populations divided by a simple mountain path.  Essentially, the wall is a barrier to gene flow. Gene flow is important to evolution. A small population without new genes can wither and die from inbreeding. Two large populations with slightly different genetic makeup can evolve into separate species if isolated from one another long enough.  Both of these outcomes are possible from the wall Trump is now trying to build under an emergency declaration.

Even if the wall is built but only lasts for a short time, it may have long lasting effects.  The BBC reported in 2014, 25 years after the iron curtain fell, the deer still avoid the border of Germany and the Czech Republic.  Most deer stick to their side of the border, despite the once electrified barrier fence being removed. Researchers tracked 300 deer with radio collars to conclude that mainly, the deer don’t cross the border.  Even an imaginary barrier such as this one could shape the evolution of an organism. If the deer don’t commingle, they might as well be separated by a wall or fence.

The truth is – we don’t fully understand the full consequences of a border wall between the US and Mexico – which should be enough to make us take a step back and think long and hard.