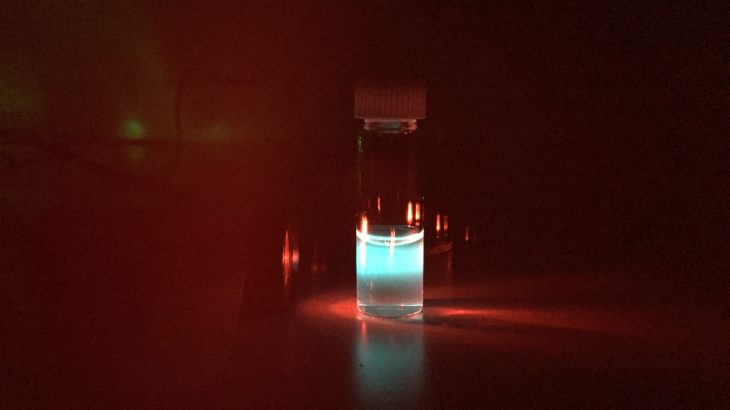 Researchers at the University of Massachusetts Medical School have used nanoparticles to give mice the ability to see near-infrared light. The experts are now working to modify these nanoparticles to potentially give humans built-in night vision.

“When we look at the universe, we see only visible light,” said Dr. Gang Han, who is the principal investigator of the project. “But if we had near-infrared vision, we could see the universe in a whole new way. We might be able to do infrared astronomy with the naked eye, or have night vision without bulky equipment.”

Humans and other mammals can detect light between the wavelengths of 400 and 700 nanometers (nm), but near-infrared (NIR) light has longer wavelengths between 750 nm to 1.4 micrometers.

Dr. Han and his team theorized that mice could be given NIR vision by injecting a special type of nanomaterial called upconversion nanoparticles (UCNPs) into their eyes. UCNPs contain the rare-earth elements erbium and ytterbium, which can convert low-energy photons from NIR light into higher-energy green light that is detectable to the mammalian eye.

In a study published earlier this year, the researchers demonstrated that their theory was correct. Experiments showed that UCNPs allowed the mice to see and mentally process NIR light for at least ten weeks without any known side effects. However, Dr. Han said that the safety of these nanomaterials must be improved before being tested in humans.

“The UCNPs in our published paper are inorganic, and there are some drawbacks there,” said Dr. Han. “The biocompatibility is not completely clear, and we need to improve the brightness of the nanoparticles for human use.”

The team is currently experimenting with UCNPs made up of two organic dyes instead of rare-earth elements. “We’ve shown that we can make organic UCNPs with much improved brightness compared with the inorganic ones,” said Dr. Han.

One of the next steps for the project could be applying this technology to dogs. “If we had a super dog that could see NIR light, we could project a pattern onto a lawbreaker’s body from a distance, and the dog could catch them without disturbing other people.”

The research will be presented by Dr. Han at the American Chemical Society Fall 2019 National Meeting.