A new method for protecting plants from viral infections • Earth.com 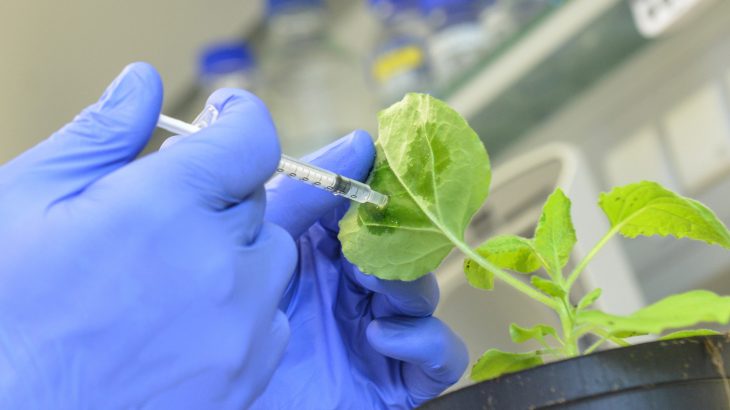 A new method for protecting plants from viral infections

A team of scientists led by Martin Luther University Halle-Wittenberg (MLU) has developed a new method which may ultimately make it easier to immunize plants for protection against viruses.

Based on plant cell extracts, the researchers created a screening process that can quickly identify and produce substances to combat various pathogens. The technique was modeled after a plant’s natural defense system, which is triggered by viral infections and other threats.

When a plant is attacked by a virus, the cells serve as a host where the virus can reproduce and establish infection by producing viral ribonucleic acid molecules (RNAs).

Plants detect these molecules and cut them up using special enzyme scissors. As a result, small interfering RNAs (siRNAs) are generated throughout the plant to launch a second line of defense.

“By implementing this two-stage process, the plant is trying to protect itself from the virus both at the site of the infection and throughout its structure,” said Professor Sven-Erik Behrens. However, he explained, this process is not very efficient. “When a viral infection occurs, lots of different siRNA molecules are produced, but very few of them have a protective effect. The majority simply saturate the Argonaute complexes, rendering them inactive.”

The team established a strategy to identify the few antiviral siRNA molecules that are effective against specific viruses so that their dexterity can be exploited for the development of new plant vaccines.

The siRNA molecules that make the best candidates for reliable vaccination must have two key properties – the ability to bind strongly to the Argonaute complexes and the capacity to lead these proteins in the right direction.

“If the pathogen changes or the plant needs to be protected against another virus, the established screening process enables suitable RNA molecules to fight the respective pathogen to be identified very quickly,” said Behrens. “This means we can be very flexible when it comes to combating new pests.”

The researchers plan to continue improving upon their method, and further studies may help to clarify how vaccines can be produced in larger quantities, as well as how they can be absorbed by plants.

According to Behrens, the research suggests that there is potential for a spray that can be used in greenhouses.”Tomato growers have to contend with whiteflies, for example, and these can transfer viruses from one plant to another very quickly.”

While harsh pesticides have been required to kill off insects in the past, the new system may prove to be a much safer and eco-friendly alternative.

The study is published in the journal Nucleic Acids Research.