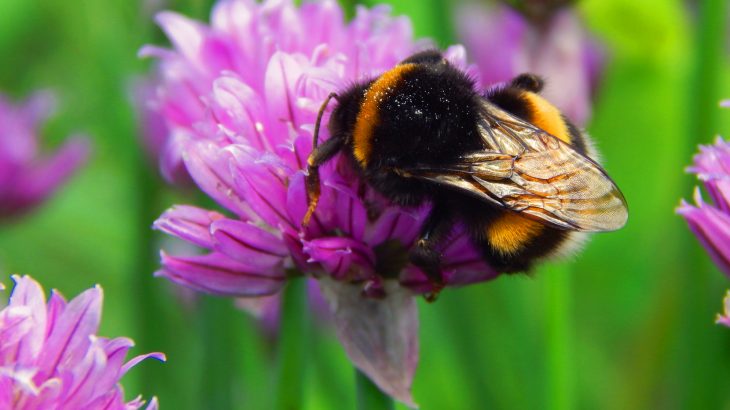 “Bigger bees, like bumblebees or the larger species in the work I’m presenting, are partially endothermic. They can warm themselves by shivering their flight muscles to produce heat but do not constantly physiologically regulate body temperature.”

The excessive heat found in the rainforests of Panama, where the bees in this study originated, can limit the flight ability of bees.

“If bees stop flying as often in hot temperatures, the amount of time they have to forage (and therefore pollinate flowering plants) decreases. This can mean they aren’t able to collect enough food to maintain the colony,” said Duell. “On a large enough scale, this negatively impacts the overall bee population and the plants they pollinate while collecting pollen and nectar for food.”

This means that better flying performance is an advantage for bees in hot climates. Bees that are unable to fly are forced to walk from flower to flower, where temperatures are even hotter on the surfaces of flowers and leaves.

Duell teamed up with Dr. Jon F. Harrison to assess how well bees fly at high temperatures and to investigate any variations based on body size. The researchers measured the air and thorax temperatures of 10 species of stingless bees, which varied in body mass between two and 120 milligrams. The experts also measured leaf and flower surface temperatures, as well as air temperatures in the sun and in the shade of the tropical forest canopy.

The researchers expected to find the smaller bees perform better in hot weather, but actually found that the opposite was true. These findings contradict the well-established theory that ectotherms are bigger in cold climates and smaller in hot ones. The large bees seem to have adapted to the hot temperatures by using their ability to maintain their own heat.

“Essentially the bigger bees are exposed to higher temperatures – sometimes in excess of 10 degrees Celsius hotter than air temperature – because they produce a lot of heat while flying,” said Duell. “That same heat producing ability gives them an advantage in cooler regions as well because they can be active earlier in the morning, later into the evening or on cooler days compared to smaller bees.”

The research was presented at the APS Comparative Physiology: Complexity and Integration conference in New Orleans.