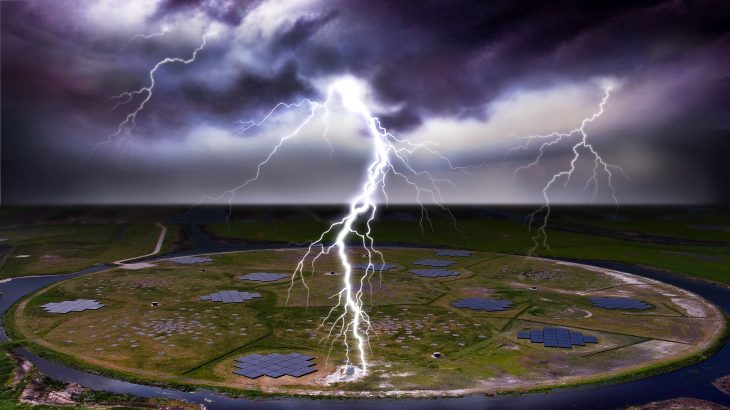 Why lightning really can strike twice

While experts have noted that lightning really can strike twice in the same place, the reason that a lightning channel is “reused” has remained unclear. But now, an international research team led by the University of Groningen may have finally solved this mystery.

By using the Low Frequency Array (LOFAR), a Dutch radio telescope consisting of thousands of antennas spread out over Northern Europe, the researchers were able to view the development of lightning flashes in unprecedented detail.

The study revealed that the negative charges inside of a thundercloud are not all discharged in a single flash. Instead, some are stored inside structures that the experts refer to as needles. The researchers determined that a negative charge through these needles may cause a repeated discharge to the ground.

“This finding is in sharp contrast to the present picture, in which the charge flows along plasma channels directly from one part of the cloud to another, or to the ground,” said Professor Olaf Scholten.

Study first author Dr. Brian Hare explained that the reason why the needles have never been seen before lies in the “supreme capabilities” of LOFAR.

“These needles can have a length of 100 meters and a diameter of less than five meters, and are too small and too short-lived for other lightning detections systems.”

For their observations, the scientists used only the Dutch LOFAR stations, which cover an area of 3,200 square kilometers. They analyzed the raw time-traces as measured in the 30-80 MHz band.

“These data allow us to detect lightning propagation at a scale where, for the first time, we can distinguish the primary processes. Furthermore, the use of radio waves allows us to look inside the thundercloud, where most of the lightning resides,” said Dr. Hare.

High-resolution 3D images of the lightning clearly showed a break in the discharge channel at a location where needles are formed. These appear to discharge negative charges from the main channel, which then re-enter the cloud. As a result, the reduction of charges in the channel causes the break.

But then, once the charge in the cloud is built up again, the flow through the channel is restored and there is a second discharge of lightning. Based on this finding, lightning can strike in the same area repeatedly.

“The VHF emissions along the positive channel are due to rather regularly repeated discharges along previously formed side channels, the needles,” explained Professor Scholten. “These needles appear to drain the charges in a pulsed manner.”

“From these observations, we see that a part of the cloud is re-charged, and we can understand why a lightning discharge to the ground may repeat itself a few times,” said Dr. Hare.