Mako shark protections supported by many countries, opposed by the US and Canada • Earth.com 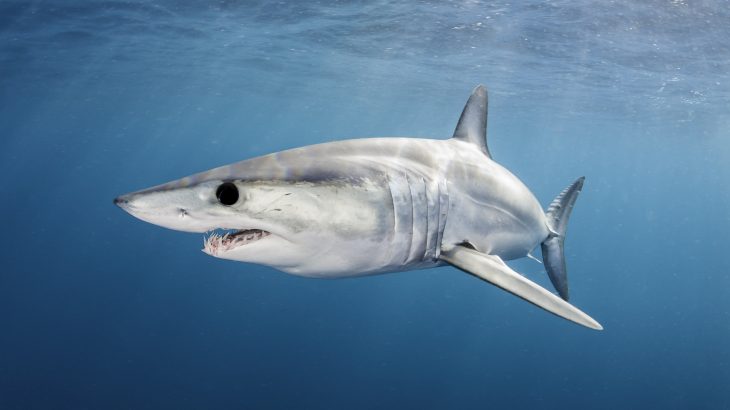 Mako shark protections supported by many countries, opposed by the US and Canada

There are two species of Mako Shark, shortfin and longfin. Although, shortfin makos are certainly more abundant than longfins.

Shortfin Mako sharks (Isurus oxyrinchus) are open water sharks like the more famous Great Whites. They are found around the world in tropical to temperate seas. Together the two species of mako sharks are sometimes known as the ‘cheetahs of the sharks’ for being the fastest known sharks. These sharks can grow to be twelve feet long but the average one is roughly half that length.

The IUCN lists longfin makos as endangered. The declines of longfin makos seems to be due largely to overfishing. According to the Wildlife Conservation Society, mako shark populations in the Atlantic have declined by roughly 90% over the last 75 years. The Mediterranean shows a 96% decline from historic mako population. Sometimes the sharks are killed merely for their fins, the rest of the animal tossed back into the ocean.

CoP18 is an international conference set to discuss protections for species under the Convention on International Trade in Endangered Species (CITES). The goal of CITES is to ensure that the trade in species or species parts such as skins or lumber don’t threaten the long term survival of those species. CITES sets a framework for laws in the countries that voluntarily agree to be bound by. This framework allows countries to relieve threatening pressure on species, even if those species live outside of CITES countries, by cutting off international trade. In this way, a country like the US takes part in the protection of endangered species in Africa, Asia and elsewhere by slowing trade in those species.

Three layers of protection are used under CITES. Appendix II species are not necessarily threatened with extinction, yet trade is severely limited to limit actions that threaten long term survival. The idea of listing a species under Section II is to keep it from becoming endangered. Today, there are more than 35,000 species of animals and plants protected to some degree under CITES.

Every year during the COP (Conference of Parties) meeting, the United Nations discusses policy changes and new resolutions. Most known for climate change negotiations, COP meetings every three years include conferences to consider new protections for species under CITES.

Proposal 42: 2 would make both species of mako sharks protected as appendix II species. The proponents of this listing are over sixty five countries, including African, South American, Caribbean and European nations. The extremely widespread and migratory nature of the mako shark makes its protection a truly global affair.

The U.S. and Canada are opposing the listing. The proposal notes that because the main threat to the longfin mako shark is fishing for shark meat, it is sometimes extremely difficult to distinguish between longfin and shortfin mako sharks. The shortfin mako is being considered under CITES protection for the sake of the longfin. This type of listing happens sometimes under wildlife protection laws. Some US state laws prohibit the sale of mammoth ivory for instance, so that elephant ivory cannot be passed off as mammoth.

Protection as a CITES Section II species for mako sharks would mean that catching the sharks would be highly monitored and numbers of shark catches shared internationally. It would also mean that sharks caught as bycatch (a major source of fatality for makos) would be required to be released alive. Verifiably sustainably caught mako shark meat would still be allowed to be traded internationally. This step is one towards regulating shark fishing on an international level, a necessity for the long term survival of animals that cross international borders regularly.

The Wildlife Conservation Society notes that most international trade in shark fins, meat and other parts are still unregulated, leaving the group as a whole threatened, despite their importance to marine ecosystems. Pew Charitable Trust reports that it’s estimated less than 20% of the shark fin trade is regulated under CITES. As top predators, sharks are in a unique position of ecological importance. By preying on abundant prey species, sharks allow less abundant species to compete and survive. In this way, sharks promote biodiversity in the world’s oceans.

The importance of mako sharks is clearly recognized by the fact that a record number of countries signed on for their protection under CITES. What’s worrying is that the US, seen previously as an international leader in conservation, was not one of them. Along with other recent environmental policies, it seems that the US federal government may be stepping back from not just it’s leadership role but it’s international responsibility. The US does have some federal laws protecting mako sharks, but alone they are insufficient to protect sharks that clearly need it.