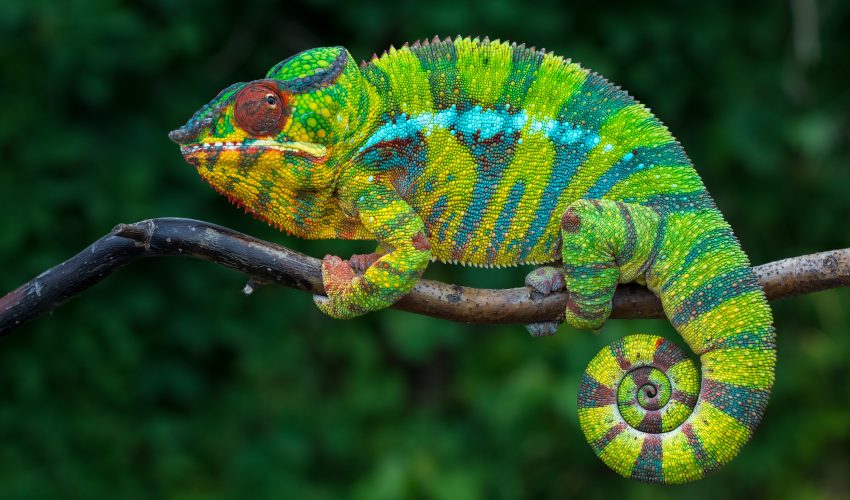 Researchers at Nagoya University have developed a composite material that can mimic the vibrant color changes of chameleons. The material contains crystals and dyes that can be manipulated to change colors and patterns when exposed to visible or ultraviolet light.

Many animals such as chameleons and frogs can shift their colors in response to changes in their environment. While experts have studied this phenomenon extensively, it has not yet been interpreted well enough to be translated into artificial applications.

“This is an exciting stage in this field of study, as we are increasingly able to adapt the color-changing mechanisms that some animals use to artificial devices,” said study first author Miki Sakai.

“If these artificial color-changing materials can equal or surpass the vibrant displays that some animals such as octopuses and frogs make, it could have exciting applications in the development of new display technologies.”

Inspired by the elaborate color transformations that takes place in the skin cells of certain frogs, the team layered their new material with components that have unique responsibilities.

The dyes, for example, contribute color that can be adjusted by mixing them to different extents. In addition, some of the dyes change color upon exposure to light.

Spherical crystals are also incorporated into the material. Rather than directly influencing the color, the crystals have microscopic structures that interfere with the light.

Finally, a black pigment and different background colors are integrated into the system to alter the colors displayed by the other components of the material.

“We examined the influences of the different components in the system, such as by changing the size of the crystals, switching the background from white to black, or performing exposure to visible or ultraviolet light,” explained study co-author Yukikazu Takeoka.

“We found these changes resulted in different colors being displayed across the material, resembling the way in which some organisms can change color in response to various factors in their environment.”

The research is published in the journal Small.