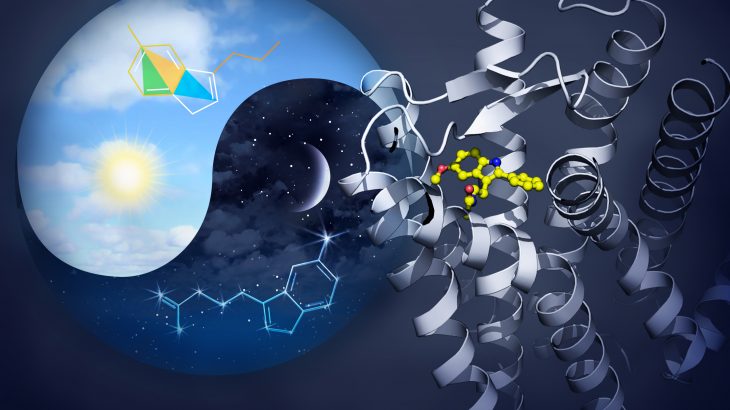 Using an X-ray laser located at the Department of Energy’s SLAC National Accelerator Laboratory, a team of University of Southern California researchers have successfully the first detailed map of two melatonin receptors MT1 and MT2) that guide the body’s sleep/wake cycle, along with other biological processes. Better understanding of how these receptors work could help scientists design better drugs to fight sleep disorders, Type 2 diabetes, and even cancer.

“It’s critical for the brain to take rest and process and store memories that we have accumulated during the day,” said study co-author Alex Batyuk, a scientist at SLAC. “Melatonin is the hormone that regulates our sleep-wake cycles. When there’s light, the production of melatonin is inhibited, but when darkness comes that’s the signal for our brains to go to sleep.”

The team used an insomnia drug, a drug that combines melatonin with the antidepressant serotonin, and two melatonin analogs to activate the receptors in order to trace their activity with the lab’s Linac Coherent Light Source (LCLS) X-ray. They saw that both receptors, located in various places throughout our bodies including the brain, retina, cardiovascular system, liver, kidney, spleen and intestine, have narrow channels embedded in fatty membrane throughout the cells in our bodies. These channels only permit melatonin to pass through while blocking serotonin.

Furthermore, the team also saw that some larger compounds only target MT1 and not MT2 — a discovery that can help design drugs specifically for MT1.

They’ve shared their work in a pair of articles, one exploring ligand recognition at MT1 and one on the XFEL structures of MT2, in the journal Nature.

“These receptors perform immensely important functions in the human body and are major drug targets of high interest to the pharmaceutical industry,” said lead researcher of MT2 work Linda Johansson, a postdoctoral scholar at USC. “Through this work we were able to obtain a highly detailed understanding of how melatonin is able to bind to these receptors.”

MT1 plays a large role in controlling the body’s circadian rhythm. However, designing drugs to actively target and mend the MT1 receptor has been a difficult process. Now that researchers have mapped out how exactly the MT1 receptor works, scientists can more adeptly design drugs to travel through these pathways.

“Since the discovery of melatonin 60 years ago, there have been many landmark discoveries that led to this moment,” said Margarita L. Dubocovich, a SUNY distinguished professor of pharmacology and toxicology at the University at Buffalo, who provided outside perspective on this study. In the early 80s, Dubocovich pioneered the identification of functional melatonin receptors.

“The elucidation of the crystal structures for the MT1 and MT2 receptors opens up an exciting new chapter for the development of drugs to treat sleep or circadian rhythm disorders known to cause psychiatric, metabolic, oncological and many other conditions.”

From here, the team hopes to map receptors antagonists, compounds that block the receptors.

“As a structural biologist, it was exciting to see the structure of these receptors for the first time and analyze them to understand how these receptors selectively recognize their signaling molecules,” said Vadim Cherezov, a USC professor who supervised both MT1 and MT2 studies. “We’ve known about them for decades but until now no one could say how they actually look. Now we can analyze them to understand how they recognize specific molecules, which we hope lays the groundwork for better, more effective drugs.”