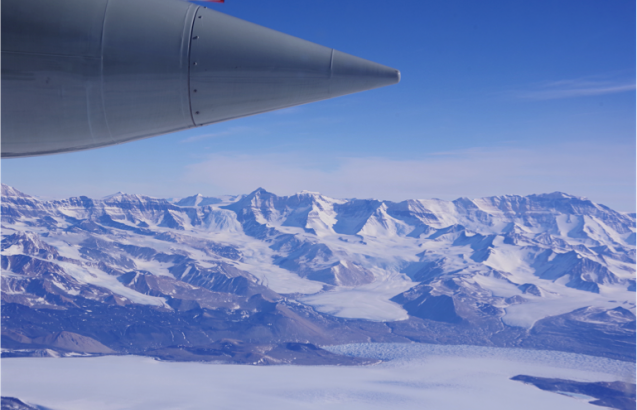 A new study conducted by the ROSETTA-Ice team, who have spent three years collecting data on Antarctica’s Ross Ice Shelf and tracking its changes, has unveiled an ancient geologic structure that restricts the flow of ocean waters. This restriction could mean that ocean currents could determine the ice shelf’s future retreat.

These findings are published in Nature Geoscience.

The Ross Ice Shelf slows the flow of Antarctic ice into the ocean by about 20% (about 38 feet of global sea level rise). In order to adeptly collect data from an area as big as Spain where the ice could be more than a thousand feet thick, the team used IcePod, a technological device that collects high-resolution data across polar regions via plane mount. It can measure ice shelf thickness, height, internal structure, and the magnetic and gravitational signal of the underlying rock.

For the most part, IcePod detected a flat signal across the ice shelf. However, about half way across, the IcePod picked up large variations that made a “heartbeat”-like map. This heartbeat almost always occurred in the middle of the ice shelf.

“We could see that the geological boundary was making the seafloor on the East Antarctic side much deeper than the West, and that affects the way the ocean water circulates under the ice shelf,” explained expedition leader and lead author Kirsty Tinto, a Columbia University’s Lamont-Doherty Earth Observatory research scientist.

Having a better understanding of the seabed under the ice shelf, the team used a model to map out ocean circulation and its effects on the melting of the ice shelf. There is an overall lack of warm water in the Ross Sea, and any warmth from the Sea’s deep ocean is cooled by the Ross Shelf Polynya before flowing under the ice shelf. This cool water does melt deeper portions of eastern Antarctic glaciers, but avoids the western Antarctic via depth change at the ancient tectonic boundary.

“We found that the ice loss from the Ross Ice Shelf and flow of the adjoining grounded ice are sensitive to changes in processes along the ice front, such as increased summer warming if sea ice or clouds decrease,” said co-author Laurie Padman, a senior scientist at Earth and Space Research.

“We found out that it’s these local processes we need to understand to make sound predictions,” Tinto concluded.