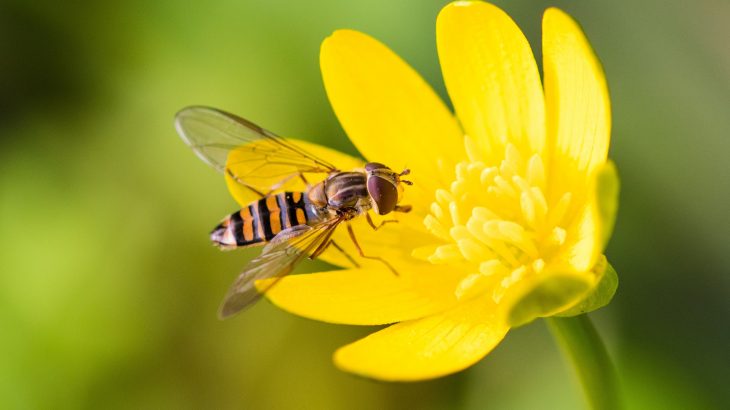 Migrating hoverflies play an important role as other pollinators vanish

Scientists at the University of Exeter are reporting that migratory hoverflies are critical for pollination and controlling crop pests as many other insects decline.

The study has revealed that up to four billion hoverflies migrate to and from Britain each year, and that these numbers have remained largely stable over the last decade.

Recent studies have found that more than 40 percent of insect species worldwide are threatened with extinction, which jeopardizes the important ecosystem services they provide like the pollination of crops.

“The number of migrating hoverflies coming and going over Britain was much higher than we had expected,” said Dr. Karl Wotton. “They are widely considered to be the second most important pollinators, after bees.”

“They are especially important pollinators of wildflowers, soft fruits and brassica crops, and their larvae prey on various species of aphids – which are the key crop pest in Europe. This dual role makes them uniquely beneficial to humans.”

Migrating hoverflies, which have only a month-long life span, arrive in Britain in the spring and their descendants leave when the summer ends.

“We are net exporters of hoverflies,” said Dr. Jason Chapman. “Each female can lay up to 400 eggs and, though many die as eggs or larvae, the departing population in autumn is larger than that arriving in spring.”

“As well as their vital pollinating and aphid-eating roles, migrating hoverflies provide food for a range of predators, including birds.”

The researchers studied the movements of hoverflies using radar data. They discovered that the hoverflies wait for favorable winds before migrating between Britain and mainland Europe.

“Migrating insects are generally bucking the trend of decline that we’re seeing with many other insects,” said Dr. Chapman. “Their mobility is probably a key part of this, as it allows them to move on to find the best habitats.”

“Hoverflies are also generalists – the adults feed on many kinds of pollen and the larvae eat many aphid species. Considering that many beneficial insects are seriously declining, our results demonstrate that migrant hoverflies are key to maintaining essential ecosystem services.”