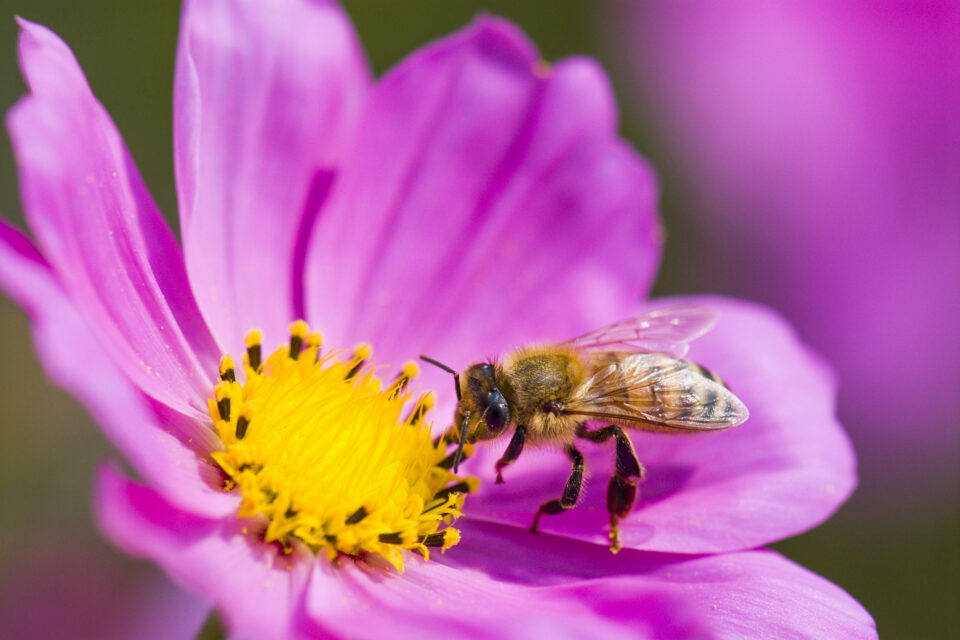 Pesticides known as neonicotinoids, or neonics, have become increasingly prevalent in the agricultural industry since they were first introduced in the early 1990s. According to a report in the journal PNAS, neonicotinoids are now the most widely used insecticides in the world.

Neonics are chemically similar to nicotine, attacking the central nervous system of insects. Ben Williamson, the U.S. Executive Director of the animal welfare organization Compassion in World Farming (CIWF), has written a report to raise awareness about the dangerous effects of neonicotinoids. These effects, says Williamson, extend far beyond the insects for which they were intended.

“Despite being touted as less toxic than previously used pesticides, neonicotinoids are wreaking havoc on bees and other pollinators who are critical to our food system, harming animals and threatening human health. Factory farming is significantly adding to their widespread use,” writes Williamson.

“About one-third of all corn grown in the U.S., spanning 30 million acres, is used directly for livestock feed. Another third is grown for ethanol production, the byproducts of which are also turned into feed. Corn feed is typically used in industrialized operations where the animals live intensively confined (either indoors or on feedlots) and are not allowed to feed naturally by grazing or foraging.”

“Most breeds of intensively farmed chickens and cattle are also bred to require high-energy diets to reach market weight quickly, making their once natural diets from foraging and grazing unsustainable for their bodies. Nearly all corn seeds used to grow ethanol and livestock feed are coated with either clothianidin or thiamethoxam, two neonic pesticides. About half of all soy, another crop often used in livestock feed, is also treated with neonics.”

In his report, Williamson breaks down how neonicotinoids affect humans, bees, and other wildlife:

Numerous studies have linked neonics to mass bee die-offs and colony collapse. The amount of active ingredient on one corn seed is enough to kill a quarter of a million bees. Over the last several years, U.S. beekeepers have lost over 30% of their colonies annually, and several wild bee populations have become endangered. When combined with other stressors such as habitat loss, disease, and climate change, the excessive use of neonics on feed crops is putting bees at critical risk.

Bees are crucial to our food system, pollinating over $15 billion worth of U.S. crops each year. Dozens of key crops across the world, including cacao, coffee, peaches, almonds, tomatoes, blueberries, strawberries, apples, and pumpkins, require bees to reproduce. Thus, the health of our bee population directly impacts the health of our food system. Fewer bees means lower crop yields, less food availability, and higher prices for consumers. These effects disproportionately impact low-income consumers, who already struggle to access and afford nutritious foods.

Mounting evidence shows that neonicotinoids are harming vastly more species than previously thought. Their negative impacts on unintended insects, birds, fish, and mammals are having ripple effects across ecosystems and food webs.

Neonics have added further pressures on the bird population, particularly seed and insect-eating birds. Eating just one neonic-coated seed is enough to kill some songbirds. Ingesting contaminated seeds or insects can also harm birds’ reproductive systems, immune systems, and navigation ability, reducing their chance of survival. North America has lost 29% of its bird population—over 3 billion birds—over the last 50 years due in large part to neonics. The pesticides have also been found in waterways across the United States, harming aquatic insects and invertebrates. This is especially concerning with the recent outbreak of avian flu, which has been most deadly to predatory birds and aquatic birds. Feeding on contaminated fish, amphibians, insects, and invertebrates like snails and mollusks could lessen their chance of survival.

According to the Environmental Protection Agency’s (EPA) own assessment, clothianidin and thiamethoxam alone are likely to adversely affect over 75% of all endangered species—more than 1,300 plants and animals. These include the San Joaquin kit fox, gray wolf, and dozens of endangered insects, fish, crustaceans, and birds. Many of the species on the list are prey animals that serve as the foundation of the food web. Chinook salmon, for instance, an endangered species and the primary food source for the also endangered Southern Resident killer whales, are among the species likely to be adversely affected.

Neonics are of particular concern to human health because they are the most widely used pesticide on the market. Neonics are also persistent, meaning they do not readily decompose in soil, water, or air. Even more disturbing, once applied to a plant or seed surface, neonics are designed absorb into and throughout the plant’s tissues so they cannot be washed off.

All humans may be exposed to pesticides through ingestion of contaminated water or food. Still, the risks from pesticides are greater for pesticide applicators and those who work and live near application areas. An overwhelming majority of America’s farmworkers are Black, Hispanic, and people of the global majority, disproportionately exposing these groups. Structural injustices, regulation loopholes, and weak farmworker protections have exacerbated the problem. Exposure to various pesticides has been linked to neurological disorders, brain tumors, childhood leukemia, and other solid tumors in children.

One study published earlier this year found multiple neonicotinoids in children’s spinal fluid, plasma, and urine. This is especially concerning because neonics attack the brain receptors responsible for proper brain organization and are involved in motor, emotional, and cognitive functions. Other studies suggest that neonics are associated with congenital malformations, autism spectrum disorder, and memory loss and could impact the human nervous system.

While some of the active ingredients are absorbed into the seed, much of the neonic seed coatings wash off into local waterways, which make their way into drinking water treatment plants. When mixed with chlorine or chloramine, however, which are used in treatment plants to kill bacteria, it can create compounds that are even more toxic to humans than the pesticide itself.

Better farming for all

The widespread use of pesticides in feed production is just another book in the library of reasons why factory farming must end. Industrialized food production has created a world of compartmentalization—with monocropped fields, CAFOs, and feedlots that operate separately. These methods undermine nature’s synergistic structure, in which plants and animals thrive without pesticides. To produce food sustainably, we must implement regenerative practices that nurture ecosystems instead of saturating them in chemicals that harm pollinators, wildlife, and people.

To do this, we must: