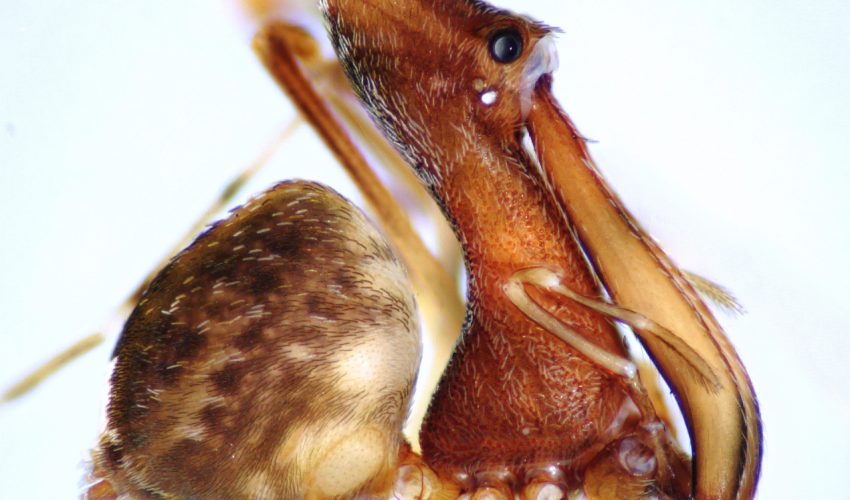 Researchers at the Smithsonian’s National Museum of Natural History have revealed 18 species of pelican spiders which have only been recently identified by curator Hannah Wood. As a result of Wood’s investigation, the illusive spiders of the Eriauchenius and Madagascarchaea genera are now categorized into 26 different species.

In 1854, a bizarre spider was found preserved in 50 million-year-old amber that had a striking resemblance to a tiny pelican. In the decades that followed, living pelican spiders were discovered in Madagascar. Experts quickly noticed that their behavior is just as unusual as their appearance.

These spiders have remained mostly a mystery until now, residing in some of the most remote areas of the world. According to Wood, the spiders are of great interest to arachnologists because they use their long necks and jaw-like features to prey on other spiders.

“These spiders attest to the unique biology that diversified in Madagascar,” said Wood.

She also explained that pelican spiders are “living fossils” that are incredibly similar to fossilized specimens which date back as far as 165 million years ago. In fact, the study suggests that these spiders were dispersed when the Earth’s supercontinent Pangaea began to break up around 175 million years ago.

The researchers believe that there are many more species of pelican spiders to be discovered. The pelican spiders described by Wood live only in Madagascar, where biodiversity is currently threatened by widespread deforestation.

The team plans to analyze how the unusual traits of pelican spiders have evolved and diversified over time. They also hope that this research will help to promote the conservation of what remains of the forests of Madagascar and the biodiversity contained within them.

The study is published in the journal Zookeys.