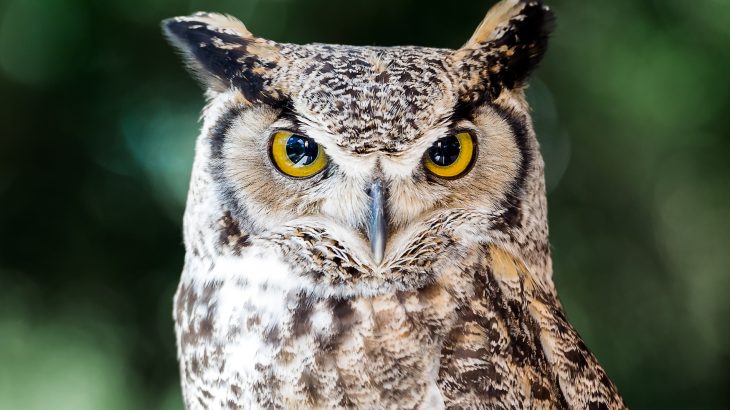 Crepuscular animals are those, like mosquitoes, that are most active in the early morning and early evening hours.  Barn owls (Tyto alba), on the other hand, have more finely tuned senses and can hunt in absolute darkness, capturing mice in laboratories only by sound.  Barn owls are eerily pale, with round white faces punctuated by dark alien eyes. It seems that the unique dish shaped face prominent on the barn owl is perfect for funneling sound and amplifying the bird’s hearing.  It isn’t always just sound that allows birds to find their way in the dark, though.

The Northern Brown Kiwi (Apteryx mantelli) is a very different bird than any owl.  The Kiwi is covered in shaggy brown fur-like feathers useless for flying but great for keeping the bird insulated.  The bird looks like little besides a brown fluff ball with a long beak protruding. The World Association of Zoos and Aquariums reports that the brown kiwi has very poor eyesight, able to see less than a meter in daylight and only two meters at night.  Instead, the Northern Brown Kiwi lives nocturnally by smelling with nostrils uniquely placed at the tip of their long beaks. Living with limited senses and no ability of flight probably works so well for the kiwi only because historically there were few predators to harm it in New Zealand where it’s native.  Other birds adapt their behavior to their environment as well.

I remember distinctly an eerie view from my first trip to Alaska.  On the tiny island of Middleton is the decaying remains of a military installation.  One of the buildings is a tall radar tower where kittiwakes nest in the hundreds. The inside of the tower has been retrofitted as a wildlife biology lab.  I spent the summer working as an intern for the US Geological Survey, collecting data on the kittiwakes and other sea birds. I was constantly reminded of the inscrutable nature of all the birds.

Stepping outside of a tent in the middle of the night, you could always see kittiwakes riding gusts of wind, almost hovering around the old radar tower high above.  The birds hang in the air all night, coming, going, just moving enough to stay air-bound next to their nests. In Alaska, it’s relatively bright for most of the night, so it’s hard to call kittiwakes nocturnal, but seeing them active commonly at 1:00 am makes diurnal a stretch as well.  But it isn’t just birds that nest in the far north like kittiwakes or puffins.

Birds like penguins that spend their lives far south are also active during hours you wouldn’t normally consider typical for diurnal animals.  Antarctica, much like the Arctic, redefines what a day and what a night is into longer stretches of time than we are used to in temperate regions.  Fairy penguins (Eudyptula minor) the only species of penguin I’ve seen in the wild are clearly diurnal since their range is relatively north compared to many penguin species.  I startled a fairy penguin on a beach in Tasmania after the smallest penguin had come out of the water towards her nest. The penguins spend the day fishing and return only after dark to their burrows.  Since Fairy Penguins are seen by humans usually only after dark, the rumor that they’re nocturnal persists. Other northern penguins such as the Galapagos Penguins (Spheniscus mendiculus) are also diurnal.  The line between nocturnal and diurnal is blurry in plenty of birds.

The Black-Crowned Night Heron (Nycticorax nycticorax) and other night herons are beautiful birds, even if they have rather stumpy necks and smaller bodies for herons.  Interestingly, the bird is most active at night but can also be seen often during the day, although it’s less energetic during daylight hours.  I’ve seen night herons near a pond in a city park in Arizona quietly standing alone in the day, staring at the water and barely moving. Other birds are more hardcore nocturnal animals with even more interesting adaptations than the famous owls.

The Oil Bird (Steatornis caripensis) is one of the strangest birds.  In terms of lifestyle, the oil bird has more in common with bats than most of its feathered cousins.  The oil bird is found in northern South America and the large, tropical island of Trinidad. Like parrots, the oil bird is a frugivore but eats almost exclusively oily rather than sweet fruits.  If the concept of an oily fruit seems odd, imagine an avocado, one of the most common oily fruits. The oil bird accumulates much of this oil within their bodies and their chicks are described as being quite fat, for this reason oil birds have been hunted for their oil rich bodies.

Fortunately for oil birds, they’re not as obvious as parrots.  Oil birds are medium sized birds of a reddish-brown color accentuated by white speckles and bear large, black eyes.  If you’re lucky you can find an oil bird sitting in a tree on a night hike in the tropical rainforest. However, oil birds mostly nest in caves, the largest colony known of being in Venezuela where 10,000 to 18,000 birds nest in the same cave.  Oil Birds are also one of the only birds to use echolocation to navigate at night, very much like bats.