Ogre-faced spiders may not have ears, but they can hear • Earth.com 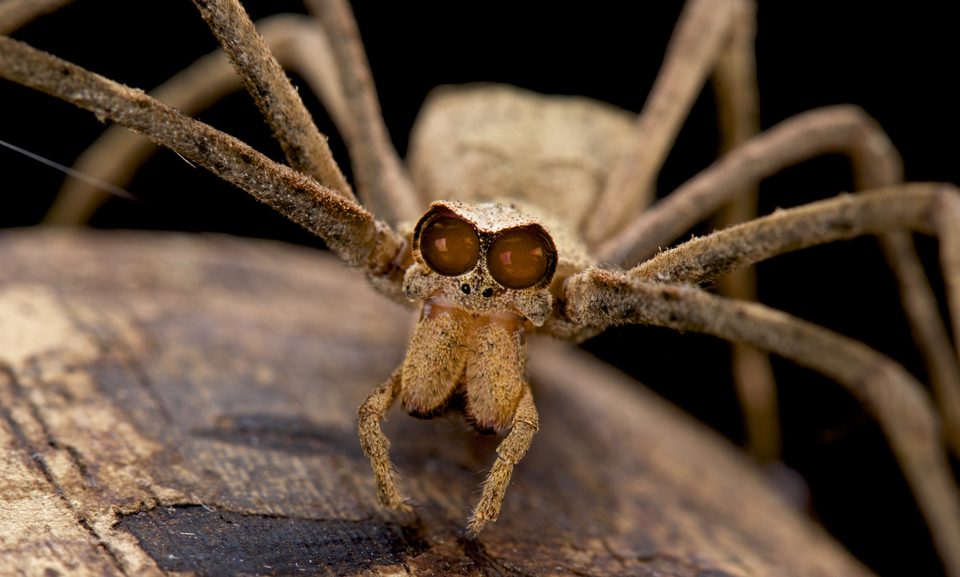 Ogre-faced spiders may not have ears, but they can hear

Scientists have discovered that ogre-faced spiders can actually hear their predators and prey, despite the fact that they have no ears. In a study published by Cell Press, the experts report that these spiders use hairs and receptors on their legs to detect sounds from at least two meters away.

Ogre-faced spiders are named after their huge eyes that give them remarkable night vision for seeking out prey. The spiders dangle from Florida palm fronds, waiting to cast silk nets on insects.

Study senior author Ron Hoy is a professor of Neurobiology and Behavior at Cornell University.

“I think many spiders can actually hear, but everybody takes it for granted that spiders have a sticky web to catch prey, so they’re only good at detecting close vibrations,” said Professor Hoy. “Vibration detection works for sensing shaking of the web or ground, but detecting those airborne disturbances at a distance is the province of hearing, which is what we do and what spiders do too, but they do it with specialized receptors, not eardrums.”

After hiding out during the daylight hours, ogre-faced spiders prepare to use their webs as a weapon at night. Instead of passively waiting for prey to get stuck, the spiders dangle out of the trees and throw their web over insects like a net.

These stealthy spiders use their night vision to catch insects on the ground, but they also catch insects in the air with a skillful backwards strike.

“In a previous study, I actually put dental silicone over their eyes so they couldn’t see,” said study first author Jay Stafstrom. “And I found that when I put them back out into nature, they couldn’t catch prey from off the ground, but they could still catch insects from out of the air. So I was pretty sure these spiders were using a different sensory system to hunt flying insects.”

The current study confirmed that ogre-faced spiders have an incredible audible range. The researchers measured the neural response of the spiders as they were exposed to different tones. The experiment revealed that they could detect sounds of up to 10 kHz in frequency, which is far higher than the sounds of a walking or flying insect.

“When I played low tone frequencies, even from a distance, they would strike like they were hunting an insect, which they don’t do for higher frequencies,” said Stafstrom. “And the fact that we were able to do that from a distance, knowing we’re not getting up close and causing them to vibrate. That was key to knowing they can really hear.”

Detecting higher frequencies may help the spiders stay alert when hiding out from birds and other predators.

“If you give an animal a threatening stimulus, we all know about the fight or flight response. Invertebrates have that too, but the other ‘f’ is ‘freeze.’ That’s what these spiders do,” said Professor Hoy. “They’re in a cryptic posture. Their nervous system is in a sleep state. But as soon as they pick up any kind of salient stimulus, boom, that turns on the neuromuscular system. It’s a selective attention system.”

Next, the researchers plan to investigate whether ogre-faced spiders can tell which direction sounds are coming from. If they can hear directionally, this could help explain how they pull off their impressive backwards strike.

“What I found really amazing is that to cast their net at flying bugs they have to do a half backflip and spread their web at the same time, so they’re essentially playing centerfield,” said Professor Hoy. “Directional hearing is a big deal in any animal, but I think there are really going to be some interesting surprises from this spider.”