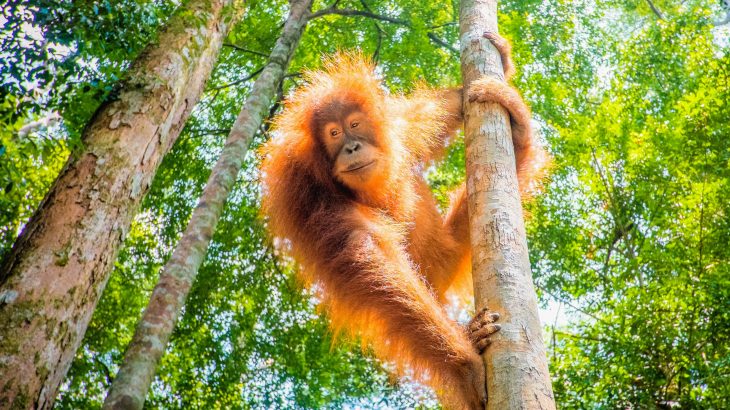 A new study has revealed that orangutans on the island of Borneo in Southeast Asia are severely threatened by food shortages. Scientists have discovered that the muscle mass of orangutans is significantly lower when less fruit is available.

Orangutans are critically endangered as a result of habitat destruction and deforestation. The finding that they are further threatened by low fruit availability was unexpected because orangutans are thought to be particularly good at storing and using fat for energy.

The study, led by Rutgers University, suggests that further disruption of the food supply could have serious consequences for orangutans.

“Conservation plans must consider the availability of fruit in forest patches or corridors that orangutans may need to occupy as deforestation continues across their range,” said study lead author Caitlin A. O’Connell.

Orangutans can live to be as old as 55 and weigh up to about 180 pounds. They are the most solitary of the great apes, spending almost all of their time in trees.

Steep declines in orangutan populations in recent decades have been primarily driven by deforestation linked to palm oil production, logging, and paper pulp.

In their Southeast Asian forest habitats, orangutans must deal with unpredictable fruit availability and frequent shortages. They often struggle to eat enough to meet their nutritional needs and maintain a healthy weight.

Study senior author Erin R. Vogel runs the Laboratory for Primate Dietary Ecology and Physiology at Rutgers. Here, the experts measured creatinine – a waste product formed when muscle breaks down – in wild orangutan urine. The goal was to estimate how much muscle the primates had when fruit was scarce compared to when fruit was abundant.

In humans, burning through muscle as the main source of energy marks the third and final phase of starvation. This phase occurs after body fat stores are greatly reduced.

The researchers were surprised to find that both male and female orangutans of all ages had reduced muscle mass when fruit availability was low. This indicated that they had burned through most of their fat reserves and their bodies had resorted to burning muscle.

“Orangutans seem to go through cycles of building fat and possibly muscle mass and then using fat and muscle for energy when preferred fruits are scarce and caloric intake is greatly reduced,” said study senior author Erin R. Vogel.

“Our team plans to investigate how other non-invasive measures of health vary with muscle mass and how the increasingly severe wildfires on Borneo might contribute to muscle loss and other negative health impacts.”