Oumuamua was a natural object, not an alien spacecraft • Earth.com 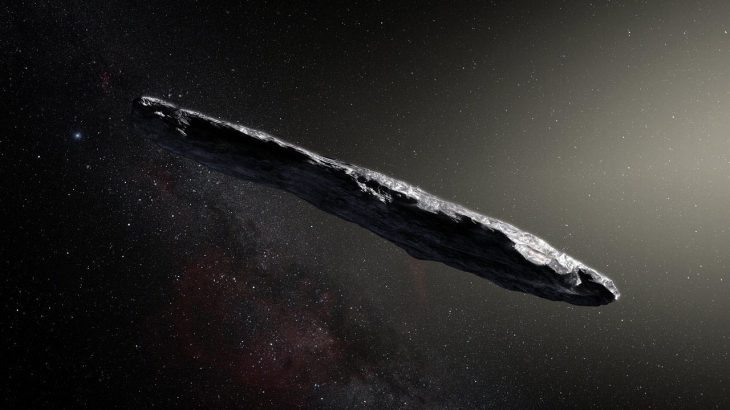 Oumuamua was a natural object, not an alien spacecraft

On October 19, 2017, the first-ever interstellar object to pass through our solar system was spotted by the Panoramic Survey Telescope and Rapid Response System 1 (PanSTARRS1) telescope, which is located at the University of Hawaii’s Haleakala Observatory.

The object, named Oumuamua, was particularly intriguing to experts because it exhibited features of both asteroids and comets. Telescopes on Earth had only a few short weeks to follow and capture images of the mysterious object.

The unusual characteristics of Oumuamua led some scientists to speculate that it was an alien spacecraft that was sent from a distant civilization to study our solar system.

However, a new study co-led by Matthew Knight, a researcher in the Department of Astronomy at the University of Maryland, has concluded that Oumuamua was a naturally occurring object and not a spacecraft.

“We have never seen anything like Oumuamua in our solar system. It’s really a mystery still,” said Knight. “But our preference is to stick with analogs we know, unless or until we find something unique. The alien spacecraft hypothesis is a fun idea, but our analysis suggests there is a whole host of natural phenomena that could explain it.”

Oumuamua was red in color with an elongated shape and moved in an odd spinning pattern. According to Knight, its motion through our solar system is especially puzzling. The object appeared to accelerate along its trajectory, yet astronomers could find no evidence of the gaseous emissions that are known to enable this acceleration.

“The motion of Oumuamua didn’t simply follow gravity along a parabolic orbit as we would expect from an asteroid,” said Knight. “But visually, it hasn’t ever displayed any of the cometlike characteristics we’d expect. There is no discernable coma – the cloud of ice, dust and gas that surrounds active comets – nor a dust tail or gas jets.”

The researchers considered a number of ways that Oumuamua could have escaped from its home system. For example, the object could have been ejected by a gas giant planet orbiting another star. The team believes that Oumuamua is the first of many interstellar visitors.

“In the next 10 years, we expect to begin seeing more objects like Oumuamua,” said Knight. “We may start seeing a new object every year. That’s when we’ll start to know whether Oumuamua is weird, or common. If we find 10-20 of these things and Oumuamua still looks unusual, we’ll have to reexamine our explanations.”