Oxpeckers alert black rhinos to the presence of humans • Earth.com 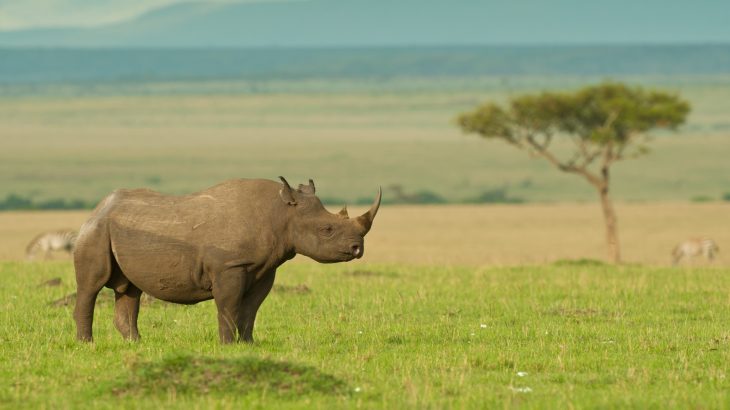 Red-billed oxpeckers protect black rhinos by calling out an alarm signal when humans are nearby. A team of researchers tracked black rhinos in the wild, and found that those who were carrying oxpeckers were much better at sensing and dodging humans.

Oxpeckers help to remove ticks and other parasites as they hitch a ride on a rhino’s back. The new study suggests that the birds also help to compensate for the rhino’s poor eyesight by calling out when a human is approaching.

The Swahili name for the red-billed oxpecker is Askari wa kifaru, which means “the rhino’s guard.” The research gives new meaning to this title, considering that the warning calls from oxpeckers can help protect black rhinos from poachers.

“Although black rhinos have large, rapier-like horns and a thick hide, they are as blind as a bat. If the conditions are right, a hunter could walk within five meters of one, as long as they are downwind,” said study co-author Roan Plotz of Victoria University.

The researchers tagged rhinos with  radio transmitters and found that they carried oxpeckers on their backs more than 50 percent of the time. Untagged black rhinos were not usually spotted with an oxpecker, which indicates that those who were carrying the birds were able to avoid human detection.

“Using the differences we observed between oxpeckers on the tagged versus untagged rhinos, we estimated that between 40% and 50% of all possible black rhino encounters were thwarted by the presence of oxpeckers,” said Plotz.

The field team conducted a “human approach” experiment, where one researcher would walk toward a rhino while another recorded the rhino’s reaction. The researchers noted the number of oxpeckers carried, the rhinos’ behavior, and the distance of the researchers when the rhinos became aware of them.

“Our experiment found that rhinos without oxpeckers detected a human approaching only 23% of the time. Due to the bird’s alarm call, those with oxpeckers detected the approaching human in 100% of our trials and at an average distance of 61 meters – nearly four times further than when rhinos were alone. In fact, the more oxpeckers the rhino carried, the greater the distance at which a human was detected,” said Plotz.

When the rhinos heard the bird’s signal, they almost always positioned themselves to face downwind, which is their sensory blind spot.

“Rhinos cannot smell predators from downwind, making it their most vulnerable position. This is particularly true from humans, who primarily hunt game from that direction,” explained Plotz.

“Rhinos have been hunted by humans for tens of thousands of years, but the species was driven to the brink of extinction over the last 150 years. One hypothesis is that oxpeckers have evolved this cooperative relationship with rhinos relatively recently to protect their food source from human overkill.”

Oxpecker populations are in a rapid state of decline and are locally extinct in some regions. Most black rhinos are living in habitats without oxpeckers.

The research, published by Cell Press, suggests that reintroducing oxpeckers into rhino populations could help with conservation efforts.

“While we do not know that reintroducing the birds would significantly reduce hunting impacts, we do know oxpeckers would help rhinos evade detection, which on its own is a great benefit,” said Plotz.