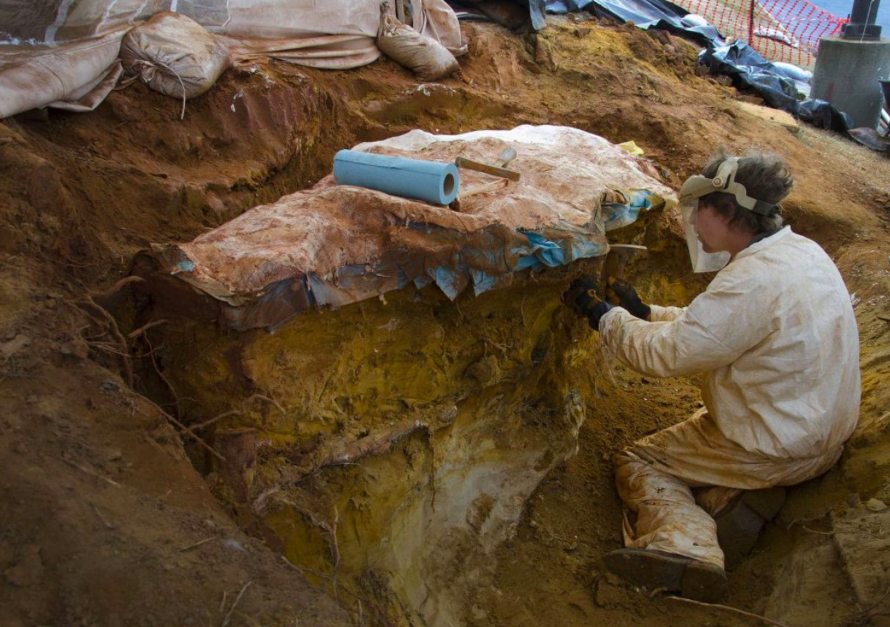 A large chunk of rock discovered in a NASA parking lot has preserved the ancient footprints of at least 70 different mammals and dinosaurs from over 100 million years ago. The scientists are reporting that the massive piece of sandstone, which measures 8.5 feet in length, is the largest known slab containing animal tracks anywhere in the world.

In 2012, paleontologist Ray Stanford was dropping his wife off for work at NASA’s Goddard Space Flight Center in Greenbelt, Maryland, when he spotted the rock.

Stanford had found a loose rock with the footprint of a small theropod at this same site a few years earlier. The brownish stone was made of iron-rich sedimentary material that Stanford recognized when he saw it again.

Experts found approximately 100 prints on the rock, including those from early squirrel-like mammals, an armored nodosaur and her baby, and theropod dinosaurs.

Study co-author Martin Lockley is a Geology professor at the University of Colorado Denver.

“I know of four or five sites in the whole age of dinosaurs that have mammal tracks and some of them only have one or two,” said Lockley. “Here, we’ve got approximately 100 footprints on it. It’s amazing.”

The scientists were able to determine that the animals passed over this particular area in a relatively short period of hours or days due to the fact that none of the tracks overlapped.

“It’s unusual to have such a large concentration of different kinds of tracks and small tracks in such a small space,” said Lockley.

While the patterns of the prints suggest the dinosaurs may have been hunting for food, this cannot be confirmed.

The scientists were most interested in the distinctive footprints of early mammals, which are a rare find. Lockley said this was one of only two sites where dozens of mammal footprints from this era had been found.