‘Particle robots’ work together as cells to accomplish tasks • Earth.com 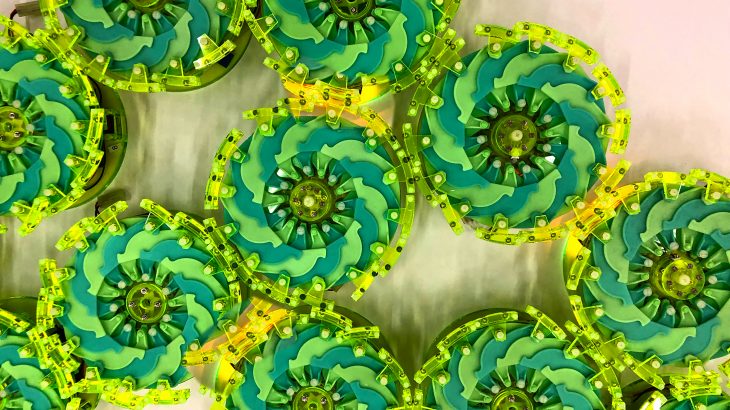 ‘Particle robots’ work together as cells to accomplish tasks

Researchers from the Massachusetts Institute of Technology and Columbia University have developed “particle robots” — simple robots that connect together to move around, transport objects, and complete tasks. Each “particle” is a disc-shaped robot that can become loosely connected to other particles via magnets around their perimeter. Each particle can expand and contract, and when specifically timed, these two actions can coordinate motion within the entire cell of particles.

The team wrote about their new invention in Nature.

“We have small robot cells that are not so capable as individuals but can accomplish a lot as a group,” said Daniela Rus, director of the MIT Computer Science and Artificial Intelligence Laboratory (CSAIL). “The robot by itself is static, but when it connects with other robot particles, all of a sudden the robot collective can explore the world and control more complex actions.

“With these ‘universal cells,’ the robot particles can achieve different shapes, global transformation, global motion, global behavior, and, as we have shown in our experiments, follow gradients of light,” Rus continued. “This is very powerful.”

Particle robots are able to transform into many different shapes, navigate around objects, and squeeze through tight openings. And because the particles do not directly communicate with each other, new particles can be added to or removed from the cell without complication. This also means the cell can continue to work even if an individual particle malfunctions.

Each particle houses a battery, a small motor, sensors that detect light intensity, a microcontroller, and a communication component that sends out and receives signals. On top of each particle is a Hoberman Flight Ring kids toy that is made of small panels connected in a circular formation that can be pulled and pushed to expand and contract. The magnets reside in each panel.

In their paper, the researchers demonstrate how the particles within a cell can navigate toward a light source. They installed an algorithm in each particle that analyzed broadcasted information about light intensity from every other particle, without the particles needing to communicate with each other.

“This creates a mechanical expansion-contraction wave, a coordinated pushing and dragging motion, that moves a big cluster toward or away from environmental stimuli,” said first author Shuguang Li, a CSAIL postdoc. Li added that the precise timing from a shared synchronized clock among the particles is what enables efficient movement. “If you mess up the synchronized clock, the system will work less efficiently,” Li said.

“The key novelty here is that you have a new kind of robot that has no centralized control, no single point of failure, no fixed shape, and its components have no unique identity,” concluded corresponding author Hod Lipson, of Columbia Engineering.

The team plans to miniaturize the particles to make a cell comprised of microscopic particle robots.