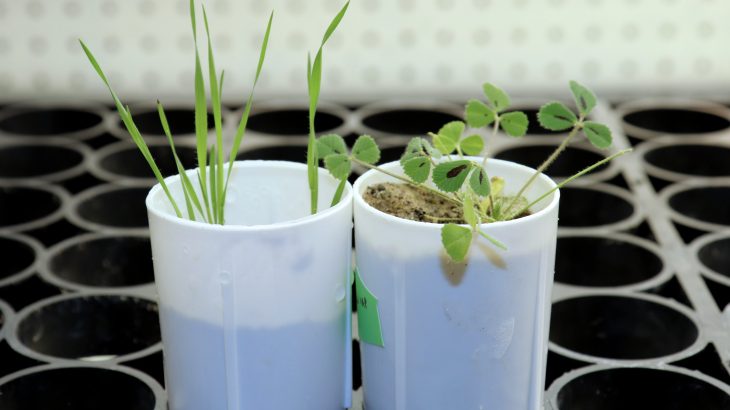 Researchers from Boyce Thompson Institute (BTI) have figured out the function of a pair of genes in plants that could aid farmers in phosphate capture and reduce fertilizer pollution in waterways, which is currently a massive environmental issue that can lead to mass fish die-offs among other problems.

This new discovery is published in Nature Plants.

Researchers built off of BTI Professor Maria Harrison’s prior work on plants’ symbiotic relationships with arbuscular mycorrhizal (AM) fungi. AM fungi occupy a plant’s roots and allows a plant to trade fatty acids for phosphate and nitrogen. AM fungi can also aid plants in recovering from stressful situations like drought. But because the AM fungi colonization is so costly, the plants pay close attention to the process.

To better understand how plants control AM fungi colonization, Harrison and colleague Lena Müller studied genes that encode short proteins called CLE peptides in two plants — Medicago truncatula and Brachypodium distachyon. These CLE peptides are important to cell development and response to stress, and they are used by a majority of plants throughout the plant kingdom.

“Being able to control fungal colonization levels in plant roots and maintain the symbiosis even in higher phosphate conditions might be useful to a farmer,” Harrison said. “For example, you may want the other beneficial effects of AM fungi, like nitrogen uptake and recovery from drought, as well as further uptake of phosphate.”

“You might be able to achieve these benefits by altering the levels of these CLE peptides in the plants,” she added.

“In the early 2000’s, researchers found that plants had a way to measure and then reduce colonization,” Müller said. “But until now, nobody really understood the molecular mechanism of that dynamic.”