Plants use their flower petals to hear approaching pollinators • Earth.com 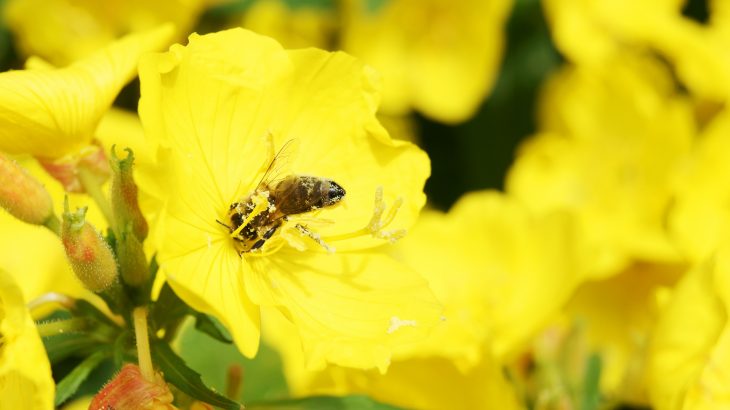 Plants use their flower petals to hear approaching pollinators

A team of biologists at Tel Aviv University has discovered that some plants can hear bees and other pollinators approaching, and they respond by making themselves more appealing. The experts found evidence that plants make their nectar both more abundant and sweeter when they detect an incoming pollinator.

The scientists demonstrated this phenomenon in the evening primrose, or Oenothera drummondii. To investigate the potential for hearing among the flowers, the scientists measured petal vibration and nectar sugar concentration in response to sounds.

“We analyzed the effect of different sound frequencies, including both pollinator recordings and synthetic sounds at similar and different frequencies.”

The study revealed that the sound of a flying bee caused the flowers to excrete 20 percent more nectar, which was also found to be sweeter, within three minutes.

The plants used the flower petals themselves as “ears,” which vibrated when the sound waves reached the frequency that is produced by a pollinator’s wings. When the sounds reached a higher frequency, there was no response from the plants.

“Our results document for the first time that plants can rapidly respond to pollinator sounds in an ecologically relevant way,” wrote the study authors.

The researchers also explained that the ability to hear the approaching pollinating insect can offer huge advantages to a plant.

“The great majority (87.5%) of flowering plants rely on animal pollinators for reproduction. In these plants, attracting pollinators can increase plant fitness and is achieved using signals such as color, odor, and shape, and by food rewards of nectar and pollen.”

The study findings indicate that plants may have evolved a sense of hearing that continues to evolve and improve. The research also suggests that noise from human activities may interfere with the ability of plants to attract the right pollinators.

The research is published on the BioRxiv open access server.