Poison dart frogs use their bright colors as camouflage • Earth.com 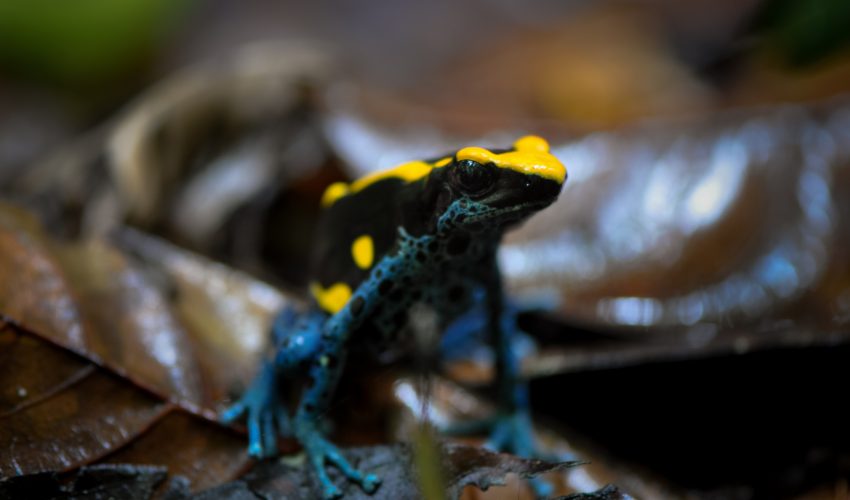 Poison dart frogs use their bright colors as camouflage

Poison dart frogs use their bright colors as camouflage. Scientists at the University of Bristol have found that the bright colors of the poison dart frog not only function as a way to ward off predators, but also serve as a second type of defense mechanism. Surprisingly, the vivid color patterns also help the frogs to blend in with their surroundings.

“Certain predators have evolved tolerance of toxins that would be deadly for humans, and some individual predators may have not encountered the warning signal prey before (a dangerous mistake for the predator, but also for the frog).”

“So, color patterns that could be distinctive close-up, but work as camouflage from a distance, would provide a clear advantage.” Poison dart frogs use their bright colors as camouflage

The researchers used a combination of computational modeling, lab experiments, and fieldwork in the jungles of French Guiana for their analysis, which was focused on the Dyeing Dart Frog.

The experts wanted to find out how this particular frog uses its colors to balance the advantages of effective warning signals with the benefits of concealment. The study revealed that the specific colors and their patterns, which attract attention at close range, actually work as a camouflage when viewed from far away.

This means that the Dyeing Dart Frog does not have to strike a balance between cautioning rivals or being concealed, because the frog’s bright yellow-and-black pattern functions both ways – as a camouflage from a distance and as a warning signal up close.

“How many other animals use ‘distance-dependent coloration’ to balance competing evolutionary pressures is yet to be explored,” said study co-author Professor Innes Cuthill. “Being able to signal when close to a would-be mate, whilst remaining inconspicuous to more distant predators would seem beneficial.”

“So too for human applications such as military camouflage, where recognition by allies is as important as concealment from foes. Also, signage that only need be clear at the distance where the information is needed, but might be distracting if detected earlier.”