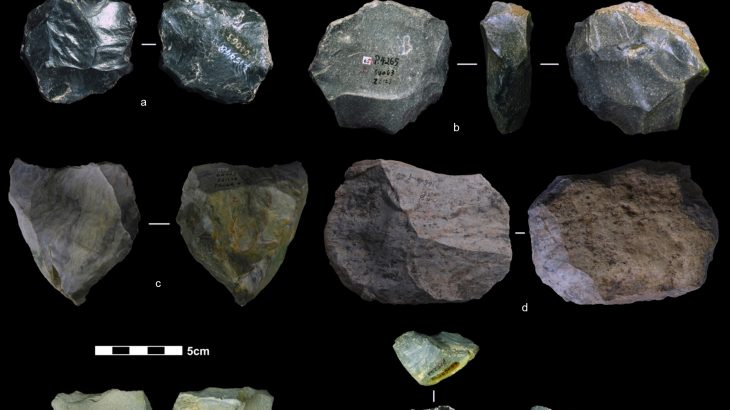 An international team of experts led by the University of Washington has found that advanced stone tools were used in East Asia much earlier than previously realized. The researchers conducted a new analysis of artifacts from South China and discovered that carved stone tools, also known as Levallois cores, were used in Asia 80,000 to 170,000 years ago.

Even though levallois cores were developed in Africa and Western Europe as far back as 300,000 years ago, they were not thought to have appeared in East Asia until 30,000 to 40,000 years ago. The current study provides evidence that the technology was developed independently in Asia.

“It used to be thought that Levallois cores came to China relatively recently with modern humans,” said study co-author Ben Marwick. “Our work reveals the complexity and adaptability of people there that is equivalent to elsewhere in the world. It shows the diversity of the human experience.”

Marwick explained that levallois-shaped cores, the “Swiss Army knife of prehistoric tools,” were very efficient and durable. These qualities were critical to hunter-gatherers at a time when a broken spear point could mean certain death by a predator. The tools were also exceptionally versatile, and could be used for spearing, slicing, scraping, or digging,

The Levallois artifacts analyzed in this study were recovered from Guanyindong Cave in Guizhou Province in the 1960s and 1970s. The experts used used optically stimulated luminescence (OSL) on the sediments surrounding the artifacts to gain a more accurate understanding of when the artifacts originated.

Sorry co-author Bo Li is an associate professor of Archaeology at the University of Wollongong in Australia.

“Dating for this site was challenging because it had been excavated 40 years ago, and the sediment profile was exposed to air and without protection. So trees, plants, animals, insects could disturb the stratigraphy, which may affect the dating results if conventional methods were used for dating,” said Professor Li.

“To solve this problem we used a new single-grain dating technique recently developed in our OSL lab at the University of Wollongong to date individual mineral grains in the sediment. Luckily we found residual sediment left over by the previous excavations, so that allowed us to take samples for dating.”

Out of more than 2,200 artifacts found at Guanyindong Cave, the number of Levallois-style stone cores and flakes was narrowed down to 45. The team established that those in the older age range – 130,000 to 180,000 years old – had been used in an open woodland on a rocky landscape.

The independent emergence of the Levallois technique at different times is not unique as far as prehistoric innovations go. For example, pyramid construction appeared in at least three separate societies: the Egyptians, the Aztecs, and the Mayans.