Record-breaking macroalgae blooms are appearing in the Atlantic Ocean • Earth.com 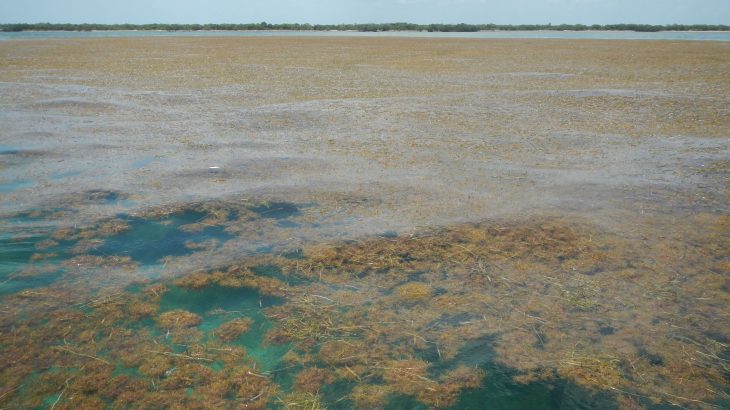 Record-breaking macroalgae blooms are appearing in the Atlantic Ocean

A team of experts led by the USF College of Marine Science has discovered the world’s largest bloom of macroalgae, the Great Atlantic Sargassum Belt (GASB), which stretched from the west coast of Africa to the Gulf of Mexico last year. Based on NASA satellite data, the team found that 200 million tons of brown macroalgae called Sargassum was floating in the surface waters.

The team also found evidence to suggest that the belt forms seasonally in response to the culmination of two key nutrients. One of these nutrients is flushed into the ocean through the Amazon River as a result of human activities, and the other is the result of natural upwelling off the West African coast.

“The evidence for nutrient enrichment is preliminary and based on limited field data and other environmental data, and we need more research to confirm this hypothesis,” explained study lead author Dr. Chuanmin Hu. “On the other hand, based on the last 20 years of data, I can say that the belt is very likely to be a new normal.”

On the other hand, too much of this seaweed makes it difficult for some marine species to move and breathe, especially when it is concentrated along the coast. Furthermore, when Sargassum dies and sinks to the seabed in large quantities, it can smother corals and seagrasses.

Before 2011, most of the Sargassum in the ocean was primarily found floating in patches around the Gulf of Mexico and Sargasso Sea. However, in 2011, Sargassum populations began emerging in massive quantities in the central Atlantic Ocean and other places it had not been seen before.

“The ocean’s chemistry must have changed in order for the blooms to get so out of hand,” said Dr. Hu.

According to Dr. Wang, the 2011 bloom was likely caused by Amazon River discharge in previous years, but was intensified by upwelling in the eastern Atlantic and river discharge in the western Atlantic. The researchers observed in the satellite imagery that major blooms had occurred every year between 2011 and 2018 except in 2013, when the cocktail of nutrients needed for the macroalgae to flourish were not present.

Despite significant Amazon discharge in 2009, the blooms did not begin to intensify in 2010 because heavy rainfall in 2009 had reduced the water’s salinity and the sea surface temperature was higher than normal. Neither of these two conditions are conducive to Sargassum growth.

“This is all ultimately related to climate change because it affects precipitation and ocean circulation and even human activities, but what we’ve shown is that these blooms do not occur because of increased water temperature,” said Dr. Hu. “They are probably here to stay.”