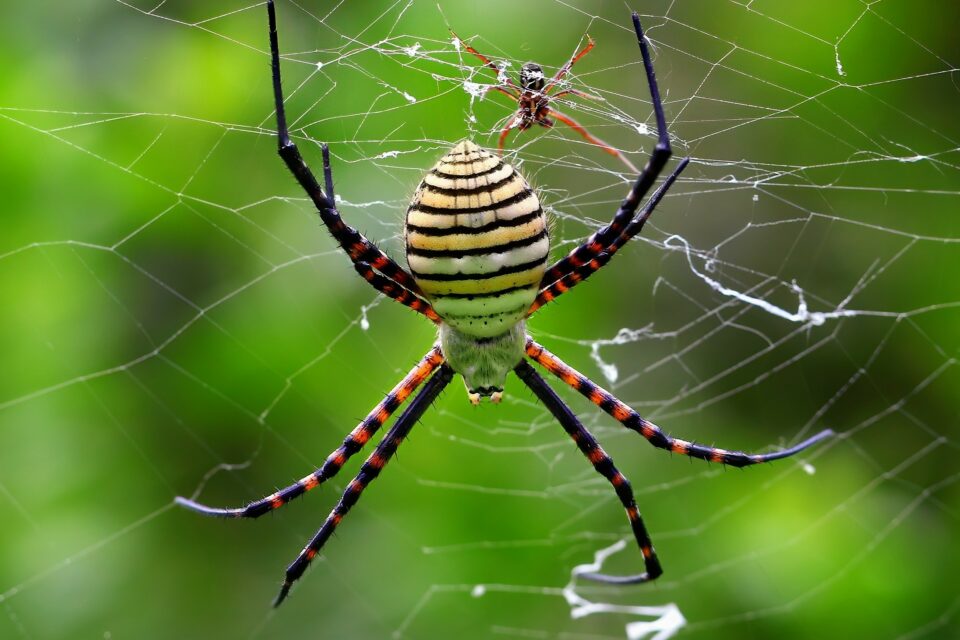 Being only a fraction of the size of the massive, cannibalistic female, the tiny male orb-weaving spider is facing significant challenges when searching for a mate. He must carefully enter her web and approach silently if he wants to escape being captured and eaten by his desired mate. Moreover, he is also forced to compete with other male spiders on the delicate arena of the web, where every wrong step could turn to be fatal.

A research team led by the Max Planck Institute of Animal Behavior and the Weizmann Institute of Science has struggled for almost a decade to understand the spatiotemporal dynamics characterizing these intricate mating strategies.

“Our initial concept was to explore the idea that these spiders moving on the web behave like electrons orbiting a nucleus, or planets orbiting a star,” said study co-author Alex Jordan, an evolutionary biologist at Max Planck. Although the precise physics explaining spiders’ movements ultimately diverged from atomic or cosmic parallels, these metaphors proved very useful.

“Imagine electrons orbiting a nucleus, or a massive star in space, so large that it generates its own gravitational field pulling in objects around it—the giant, cannibalistic female can be thought of in the same way,” explained Jordan. “Now imagine smaller planets, satellites, or comets coming near this attractive force—these are our tiny, brave males.”

Like a cosmic collision that vaporizes a small planet caught in the force field of a large star, male spiders that approach the female too rapidly, or from a wrong angle, run the risk of turning into prey.

“Working in the rainforests of Panama, I’ve seen over-zealous males fall victim to the cannibalistic females many times, especially when they take the wrong path, or approach the female too fast,” said study co-author Sylvia Garza, a Master’s student at Max Planck.

The relationship between competing males can also be explained through cosmic metaphors. Just as the smaller planets have their own gravitational pulls, the males initially approach and attract each other, but as they come closer and closer, the attraction turns into repellence, and they will end up crashing into open fighting.

All this fascinating choreography does not require advanced intelligence. Instead, the surface of the web acts as a conduit for the physical vibrations spiders use to communicate and to balance risk and reward. The effective physical forces that males and females experience on the elastic surface of the web can help them solve intricate tasks that would otherwise require a much more complex cognitive machinery.