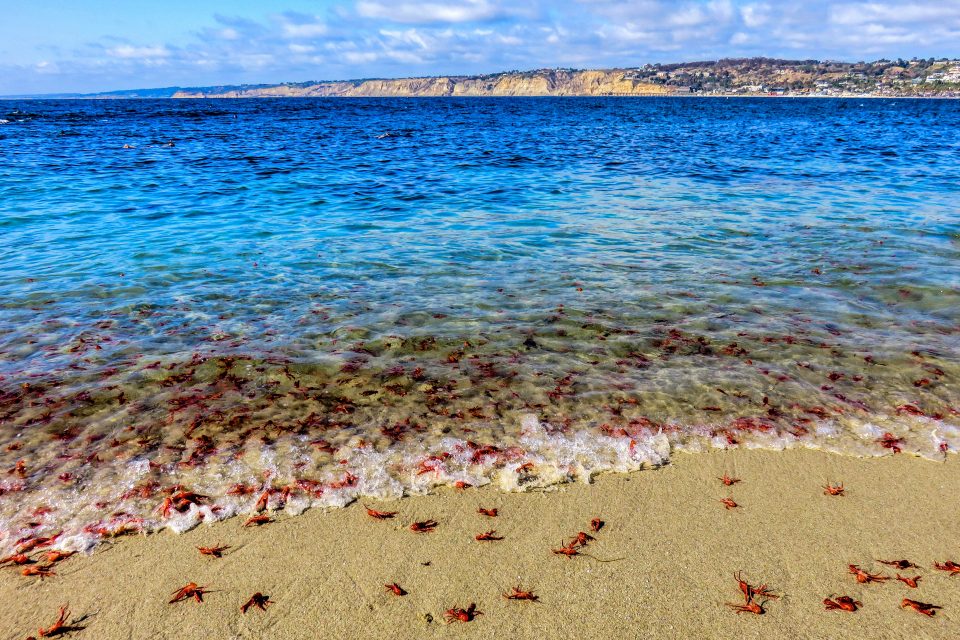 In a new study from UC Santa Cruz, experts have discovered why pelagic red crabs are sometimes found stranded in staggering numbers outside of their range.

The crabs have been known to wash up on the West Coast of the United States in the millions. The new study suggests that abnormal ocean currents push the creatures out of their home range in Baja California.

Study lead author Megan Cimino is a biological oceanographer at the National Oceanic and Atmospheric Administration (NOAA) and UC Santa Cruz through the Institute of Marine Sciences Fisheries Collaborative Program.

In 2018, Cimino had biked past a pelagic red crab stranding on route to her office in Monterey, California. Years earlier, she had witnessed another stranding event in Southern California.

“At that time, I had no clue what a red crab was, what was going on, why they would be there,” said Cimino. “But it was very clear something different was going on in the ocean – something unusual.”

When she brought this to the attention of her colleagues, the team decided to investigate what was driving these unusual events.

For months, the experts analyzed information from sources including oceanographic research surveys and citizen science programs to compile data about the recorded range of the red crabs and the occurrence of strandings from 1950 to 2019.

Ultimately, the researchers found that the appearance of red crabs outside of their normal range correlated with the amount of seawater flowing from Baja California to central California.

The evidence supports the idea that strong currents, and not warm water associated with Niño events, cause the red crab strandings.

The researchers used a regional ocean model of the California Current System, which was developed by scientists in the UC Santa Cruz ocean modeling group, to study the ocean currents that can push red crabs out of their range.

“What you’re doing is putting a tracer – you could think of it like a dye – into a particular part of the ocean and then running the model backwards in time to see where that came from,” said study co-author Michael Jacox.

Based on the results, the team created the southern source water index (SSWI), which shows how much water off the central California coast comes from south of the U.S.-Mexico border.

“It’s that pathway of water that brings up some of these unusual species,” said study co-author Ryan Rykaczewski. “It’s not just the pelagic red crabs, even though those might be the most conspicuous species that we see on the coast.”

According to the researchers, the red crabs represent a larger phenomenon that they can use the SSWI to better understand.

“The index could be used as a kind of early warning system about what the ocean state is that year and whether we’re going to expect southern species in northern regions,” said Cimino. “That can help us plan and manage and give expectations for bycatch or different fisheries.”