Temperatures control the timing of hibernation for monarch butterflies • Earth.com 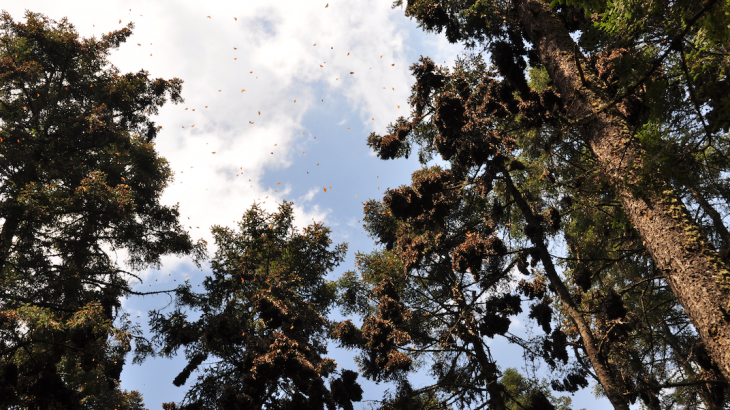 Temperatures control the timing of hibernation for monarch butterflies

Every year in the fall, millions of North American monarch butterflies travel thousands of miles to the same overwintering sites in central Mexico and along the coast of California. Once they reach their destination, the butterflies spend several months in a state of dormancy known as diapause, which helps them survive the winter months.

Scientists who study biological timing have been perplexed by how the end of diapause is signaled among the butterflies. A type of internal timer alerts the monarchs that it is time for spring migration weeks before the temperatures change or the days get longer.

Previous research focused on other organisms has shown that cold temperatures can influence the diapause-termination timer. Dr. André Green, a biologist at the University of Michigan, theorized that diapause timing among monarchs is also sensitive to cold temperatures. After investigating at monarch overwintering sites in central California, Dr. Green confirmed this theory.

“These results are particularly interesting because they address a counterintuitive result: How does cold temperature, which normally slows down an organism’s metabolism and development, speed up diapause? This work is one of the first to provide insights into this question,” said Dr. Green.

According to the researchers, the findings have important implications for North America’s monarchs, whose populations have declined steadily for decades at overwintering sites as a result of climate change.

“Understanding how diapause dynamics are affected by environmental and anthropogenic factors at their overwintering sites may be critical for understanding North American monarch population decline and guiding future conservation efforts, a point highlighted by the record low number of monarchs recorded in the western North American monarch population in 2018,” wrote Dr. Green and his co-author Marcus Kronforst.

For the investigation, the team captured female monarch butterflies at overwintering sites after they entered diapause. The live insects were then transported to a lab where they were placed in an environmental chamber.

The butterflies were exposed to light and temperatures that were designed to mimic the November conditions of central California, which is where they had been hibernating. In both December and January, additional female monarchs were moved to the lab from the same region.

Next, Dr. Green compared the reproductive maturity of the different groups by counting the number of eggs in each female. An abundance of mature eggs is an indication that the female has terminated diapause, while a scarcity indicates that she is still in a dormant state.

“The monarchs collected from the wild in December showed increased reproductive development compared to the monarchs that had been in the laboratory since November,” said Dr. Green. “This indicated that an environmental condition in the wild – cold temperature – sped up the timer.”

Dr. Green is currently working on a study of monarch migration at a site in U-M’s Matthaei Botanical Gardens.

The research is published in the journal Molecular Ecology.