Tropical forests can adapt, but they have their limits • Earth.com 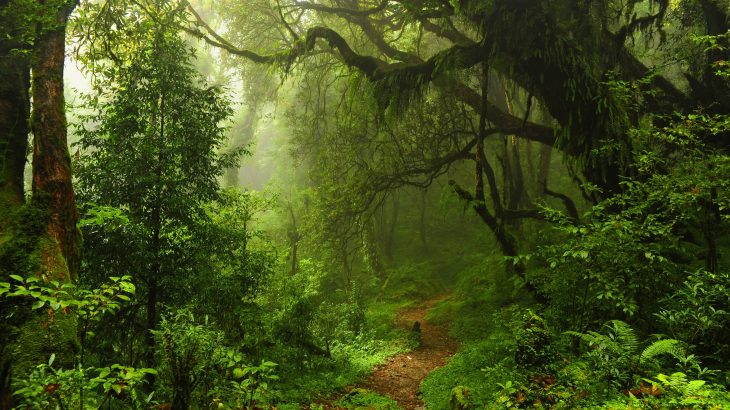 Tropical forests can adapt, but they have their limits

Despite concerns that climate change could reduce the ability of tropical forests to serve as carbon sinks, a new study reports that these ecosystems have the capacity to continue to store large amounts of carbon as temperatures rise.

There is a tipping point, however, and greenhouse gas emissions must be reduced to avoid pushing tropical forests over a safe threshold.

An international research team led by the University of Leeds set out to investigate how much carbon tropical trees can store in today’s warming climate. The experts measured over half a million trees in 813 tropical forests.

The study revealed that tropical forests are still storing large amounts of carbon under high temperatures. The researchers determined that these forests will continue to serve as critical carbon sinks up to an estimated threshold of 32 degrees Celsius in daytime temperature.

“Our analysis reveals that up to a certain point of heating, tropical forests are surprisingly resistant to small temperature differences. If we limit climate change they can continue to store a large amount of carbon in a warmer world,” said study lead author Dr. Martin Sullivan.

“The 32 degree threshold highlights the critical importance of urgently cutting our emissions to avoid pushing too many forests beyond the safety zone.”

“For example, if we limit global average temperatures to a 2°C increase above pre-industrial levels this pushes nearly three-quarters of tropical forests above the heat threshold we identified. Any further increases in temperature will lead to rapid losses of forest carbon.”

The study is the first to analyze the long-term climate sensitivity of tropical trees based on direct observation of forests across the tropics.

The research suggests that, in the long-term, temperature will have the greatest effect on forest carbon stocks by reducing tree growth. Drought will have the second largest influence by causing hydraulic failure and death.

According to the researchers, tropical forests have the capacity to adapt to some climate change, partly because of their high levels of biodiversity. Tree species that are more tolerant of new climate conditions will thrive and replace the less adaptable species over time. In order to maximize this potential, however, forests must remain intact.

“Our results suggest that intact forests are able to withstand some climate change. Yet these heat-tolerant trees also face immediate threats from fire and fragmentation,” said study co-author Professor Beatriz Marimon. “Achieving climate adaptation means first of all protecting and connecting the forests that remain.”

“The study indicates a heat threshold of 32 degrees Celsius in daytime temperature. Above this point tropical forest carbon declines more quickly with higher temperatures, regardless of which species are present.”

“Each degree increase above this 32 degree threshold releases four-times as much carbon dioxide as would have been released below the threshold.”

Reducing carbon emissions enough to keep tropical forests functioning as carbon sinks will be a challenge.

within the safety zone will be very challenging. Study author of the University of Leeds said: “Keeping our planet and ourselves healthy has never been more important. Right now, humanity has a unique opportunity to make the transition toward a stable climate,” said study co-author Professor Oliver Phillips.

“By not simply returning to ‘business as usual’ after the current crisis we can ensure tropical forests remain huge stores of carbon. Protecting them from climate change, deforestation and wildlife exploitation needs to be front and centre of our global push for biosecurity.”

“Imagine if we take this chance to reset how we treat our Earth. We can keep our home cool enough to protect these magnificent forests – and keep all of us safer.”